By chance I had a few interactions on Twitter recently that happened to follow a similar theme, that theme being supposed-Christians attempting to be holier than Jehovah by creating additional sins that don’t exist, or misinterpreting sins that are mentioned, and imposing a higher standard than Jehovah demands.

I’ll start with a post that had a list of sins that all Christians were supposedly bound to acknowledge and speak against: 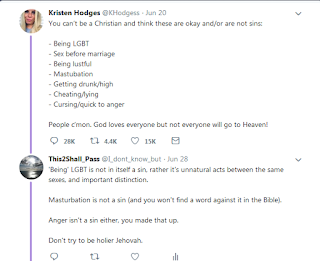 As you can see from the image above, I responded by highlighting three errors made by the female poster. The orginal poster didn’t bother to reply, but another person did, and here are the screenshots of the conversation (sadly, as I made my final point, and he had no response, he blocked me, meaning that some of his messages are no longer available, but hopefully you will get the gist by reading my replies:

The first topic we discussed was ‘quick to anger’. I maintained that this was not in itself a sin, but is best avoided, as it can lead to sin and other errors. I pointed out that there are plenty of very righteous men in the Bible that become angry on occasion. It is a part of human nature for everyone, with the only variable being the speed with which anger can arise. The Holy Spirit certainly slows down the capacity to become angry. The point is simply that the poster was trying to define it as a sin, which is nonsense, and we Christians should not add or subtract from the laws of Jehovah.

When I woke up the next day, this person ‘Daniel Swaf’ had blocked me. I hope that he’s considered the example I gave and repented of his view. It’s truly an amazing feature of our faith and the gift of the Holy Spirit that someone can be a homosexual and yet be able to successfully subdue his desires so as to avoid sinning. I remember feeling aggravated when I first read the tweets of the homosexual man, but before reading of his ability to deny his nature thanks to God, and then being mightily impressed with the power of God. It would be ridiculous to condemn him for sinning if he masturbated, as it would be to condemn anyone for masturbating, or for becoming angry.

I also had another interaction with a female on Twitter recently on exactly the same subject, where she tweeted along the lines of ‘if you’re admitting that you’re gay, you may think you’re a Christian, but you’re not’. When challenged that sodomy was the sin, rather than being homosexual, she blocked me quite quickly, and perhaps also for the reason that she was regularly quoting female preachers and encouraging other women to divorce as she had. A great example of a fake Christian in fact, getting it wrong by trying to be too holy on one subject, and getting it wrong by ignoring laws that didn’t suit modern women.

All of these interactions at the same time led to this post, so I hope it helps you to stick to the laws, do what Jehovah commands as best you can, but please don’t add to the laws, nor omit laws that you think are ill-suited to modern times. Just stick with what Jehovah gave us as instructions, He knows precisely what we need, and we are advised not to judge others anyway.