Time is short, so I need to give my readers advance warning of some of the troubles that will be hitting the world over the next decade or so. Most of these troubles are directly as a result of Jehovah’s righteous wrath being meted out on humanity, all of it will be totally deserved.

The item I am going to cover today is simply a factor of one of His righteous laws reaching its appointed time. Even though puny humans decide to totally ignore this law all over the world, and have ignored it for most of recorded history, it doesn’t stop Jehovah from applying His law anyway. I wonder if I am the only person to have spotted this particular example? It was one of those incredible moments of revelation when I spotted it last year, yet further proof that Jehovah is in total control, despite humans perpetually disobeying Him.

Here is some scripture:

‘The Year of Jubilee

8And thou shalt number seven sabbaths of years unto thee, seven times seven years; and the space of the seven sabbaths of years shall be unto thee forty and nine years. 9Then shalt thou cause the trumpet of the jubile to sound on the tenth day of the seventh month, in the day of atonement shall ye make the trumpet sound throughout all your land. 10And ye shall hallow the fiftieth year, and proclaim liberty throughout all the land unto all the inhabitants thereof: it shall be a jubile unto you; and ye shall return every man unto his possession, and ye shall return every man unto his family.

Jehovah demands that all property (including money) is returned to its original owner at this Fifty Year Jubilee. This law is to remind us (I believe) that all of what we own is never really ours here on earth, and Jehovah states as much here:

‘The Law of Redemption
23The land shall not be sold for ever: for the land is mine; for ye are strangers and sojourners with me. 24And in all the land of your possession ye shall grant a redemption for the land.’

I wonder how many humans grasp this point? A few perhaps, but not many. It’s all His, not ours, we are just temporary custodians. For this reason, He does not allow possessions loaned to others to remain in the others’ hands for ever, but sets a limit on the loan, and demands redemption in the 50th year.

So, that’s the Law of the Jubilee Year (or a portion of it). As usual, Jehovah promises to bless and take care of His people if they adhere to His law, as He’s a loving and righteous God:

The Blessing of Obedience

(Deuteronomy 4:1-14; Deuteronomy 11:1-7; Deuteronomy 28:1-14)
18Wherefore ye shall do my statutes, and keep my judgments, and do them; and ye shall dwell in the land in safety. 19And the land shall yield her fruit, and ye shall eat your fill, and dwell therein in safety. 20And if ye shall say, What shall we eat the seventh year? behold, we shall not sow, nor gather in our increase: 21Then I will command my blessing upon you in the sixth year, and it shall bring forth fruit for three years. 22And ye shall sow the eighth year, and eat yet of old fruit until the ninth year; until her fruits come in ye shall eat of the old store.

Trust in Jehovah, obey Him too, and you’ll be well looked after. Not much to ask is it, and the rewards last into eternity.

So, you may be wondering when I am going to get to the point of this post, my Watchman Warning for the near future. Here it is.

The Fifty Year Jubilees are still running, like clockwork, and the next one is due in 2032. The run in to that year will see the application of Jubilee rules for the value of property, debts and money itself, with values decreasing as we move nearer and nearer to that year.

I work in the investment world, and I have long known that the world was headed for trouble in the early 2030s, but when I was reading through the Old Testament last year I realised that the same thing happens every fifty years, like clockwork (of course) and inevitably will happen again fifty years after he previous occurence.

So, these days, what is the ‘asset’ that is loaned more than any other? Unlike in Biblical times, we now live in a very financialised world, so the asset that has been loaned like never before on earth is money, otherwise known as ‘credit’. Most of you save in ‘credits’. The rules state that the money needs to be returned to the lender by that fiftieth year in 2032, but we know that people and governments just ignore the law of Jehovah, so let’s have a quick look at the last two Fifty Year Jubilees to see what happened. The previous two years were 1982 and 1932, and I did some research online and was able to see the cycle repeat back into the 1700s as the world started to industrialise. I am sure the cycle of this law traces all the way back to Biblical times too, and nearly every instance will be driven by Jehovah rather than by nations obeying their God.

I think most people will know that 1932 was a terrible year, the depths of the Great Depression, and huge amounts of loans of money were written off by the lenders as it couldn’t be repaid. The stock market crash that began in 1929 finally reached a bottom in 1932 (on the 8th day of the 7th month as it happened): 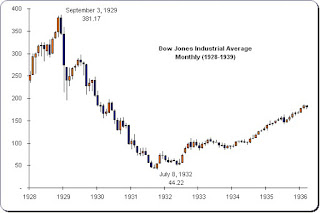 I will cover some of the non-financial aspects of the period in the 1930s and the 13 years ahead of us in another post, but for now I will stick to the ‘money’ side of things. So, 1932 was a time of money/debt destruction, and those lenders who did not heed Jehovah’s law ended up losing huge sums, hundreds of banks and businesses went bust in that time. So what about 1982, I doubt as many people are aware of the problems at that time as they are of the Great Depression, but it was very similar, and one again, huge debts were the cause of the problem.

In the 1950s til the 1970s many governments ran up huge levels of debt, they thought they could keep on racking up the debts with no upper limits. Jehovah won’t allow that, so there was a ten-year period of high prices and government debts became nearly worthless, and many currencies themselves lost significant amounts of their purchasing power as a result. This is best shown using a chart of the US treasury interest rates: 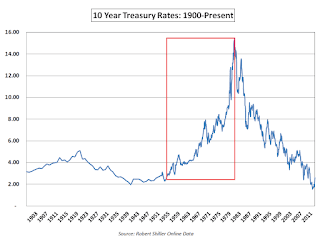 The worst of this period was around the year-end of 1981 into early 1982. High rates on government bonds (and other debt instruments) means that the value of the underlying bond has plunged, as we would expect to see as we head into a jubilee year. Prices of commodities exploded too, as investors the world over ran away from holding the US dollar and US debts and instead sought real physical assets. Please note that these interest rates and bond values were not set by the Federal Reserve, but by Jehovah, via the markets. Stock markets in the ten year period leading into 1982 were flat nominally, but investors lost around 75% in real terms, because inflation rates averaged around 8-10% for over 10 years. Once again, humans used usury to excess, and ignored Jehovah’s laws, but He saw that His will was done anyway, humans could do nothing but watch and suffer, and serve them right too.

So, as we head into 2032, I expect to see very similar problems cropping up, but it’ll be even worse than the 1930s and the 1970s, as debt levels are beyond ridiculous these days. We have a combined bubble in nearly everything from stock markets to corporate debt to government bonds and to property. The value (in real terms) of all of these assets will plummet, and so will the buying power of your money, as debts are wiped out and once again the investment world rushes to invest in real physical assets. The impact on your lives will be huge, as governments around the world effectively go bust, many through the hyperinflation of their currencies to worthlessness, many through actual defaults on their debts. The assets that make up your pension funds will crash in real value, so your pensions will become as good as worthless. Life as you know it will come to an end, as we have ignored Jehovah’s laws, especially as regards usury to one’s kinsmen, and as regards redeeming property in an orderly fashion every fifty years.

The purpose of this post is to glorify Jehovah and His always sensible and righteous laws, and to warn anyone who reads this of what lies ahead. We caught a glimpse of the issues we could face back in 2008-09, but that was just a trial run for what lies ahead. Things are likely to get really nasty as people the world over (in the developed world) finally reach a huge day of reckoning, and see that debt cannot be increased to eternity, and governments do have to limit their spending. Few will grasp the reasons behind the collapse, so there will be a lot of anger and unrest I suspect. Prepare accordingly.

There is a way to work to Jehovah’s law and return the money you have loaned in the very near future, and instead of holding that money as your savings, you could instead hold an asset that has no creditor, but it is truly yours, fully bought and paid for. That asset is likely to increase greatly in value as the value of money plunges. I am willing to share the details of this asset to Christian brothers and sisters, but not publicly, as I don’t want to help our enemies at all. So, leave a comment down below and we’ll find a way to communicate privately if you need to know.

Perhaps also stock up on some tinned food too though, for reasons to be explained in an upcoming post.

In conclusion, there are thousands of puny humans who make their livings by peddling debt-based investments, and millions who see no issues with unlimited usury to their kinsmen, and billions who choose to ignore Jehovah’s Fifty Year Jubilee law. All of these people really do deserve the tribulations and suffering that lies ahead, and I hope and pray that one day soon, the world will repent of its evil ways, and learn to love our God Jehovah, and obey His laws, so that He can bless us again.

If we don’t, the tribulations due in the next 13 years are likely to be far worse than any of you can imagine, as His patience is not infinite, and we know He will send His Son back to take control eventually, maybe sooner than we might imagine. Are you ready?