Saturday 23rd February was a very interesting day for me, one of the most fascinating of my life. At the time I was somewhat surprised by the events that transpired, but upon reflection, none of it should have been unexpected.

In the afternoon on that day I became engaged in a debate/disagreement with a Jehovah’s Witness twitter account, after it picked up on a comment I’d made that included the name Jehovah. Within the discussion thread, I was directly attacking satan, accusing him of his usual lies and deceit, and of being a coward.

Here is a link to the thread, but please note it becomes slightly disjointed and sub-threads appear, as we each replied to comments, rather than keeping it all on one thread:

I will also now provide some screenshots, so that you can get a gist of my comments without needing to scroll through the whole thread: 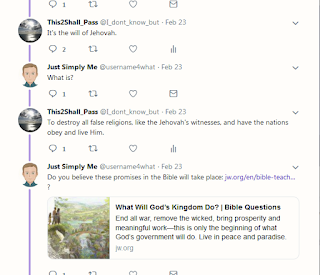 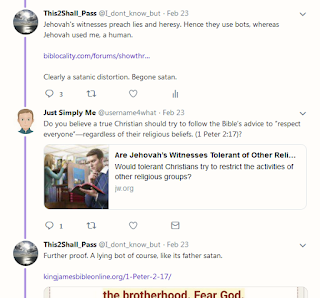 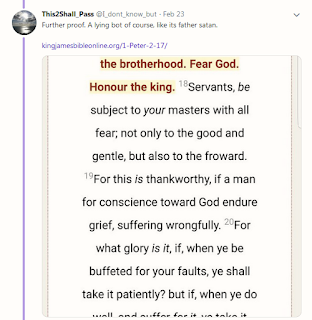 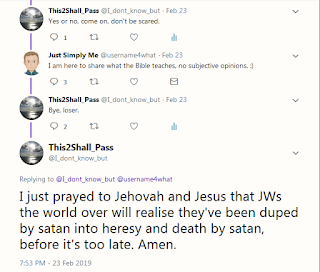 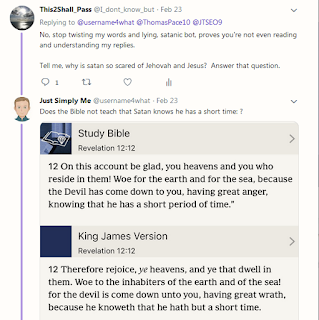 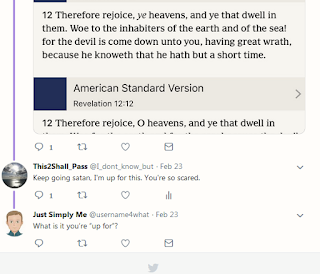 So, it wasn’t a bot, it was a real Jehovah’s Witness person manning this Twitter account that day. They tell very subtle lies, attempting to equate Jesus Christ with Adam (and all other humans) as ‘sons of God’.

Scripture reveals that Jesus Christ was the literal Son of God, of Jehovah’s seed, and born by Mary, whereas all other humans are more figurative sons of God, created via His hand, but not (obviously) of His divine seed. The Gospels confirm this fact several times, for example:

For God so loved the world, that he gave his only begotten Son, that whosoever believeth in him should not perish, but have everlasting life.

I am not sure why I was so fiery in my attacking of Satan on that day, but I have been more and more salty in online discourse these past two months, during which I have seen and experienced the protection and guidance of the Angel of the Lord, and only a week or so earlier I had witnessed a physical example of the hand of God literally changing something in our material world to give me a sign that he exists. So, I have been feeling very pumped up with the Holy Spirit, and this has spilled out in my attacks on Satan and his lies online, as well as in my proclaiming the word of Jehovah and Jesus Christ too.

So, given that I had only just recently had been given a physical sign of the existence of Jehovah, (when a pop song was replaced by a gospel song, but only on a playlist on my phone, not on the same playlist on my PC, nor on a CD burned of the playlist), what happened during the evening of Saturday 23rd February really wasn’t a surprise at all, although at the time I was surprised.

I had just returned home from a trip to the supermarket, and was unloading my car, when I noticed I had received a direct message from a twitter account, one that I’d recently followed and that had followed me back. It was an account focussed on stock  market trading, and I’d had some interaction with that account earlier that week, although the interaction (at the time) didn’t strike me as out-of-the-ordinary at all. Here is the earlier public interaction to give you some background, and perhaps you will notice one or two things that I failed to notice at the time, but which were quite obvious when I reviewed them after the events of 23rd February: 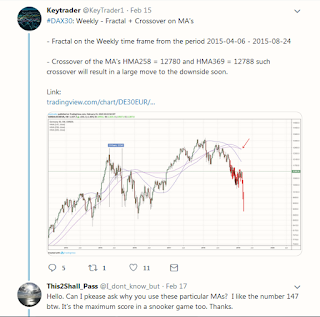 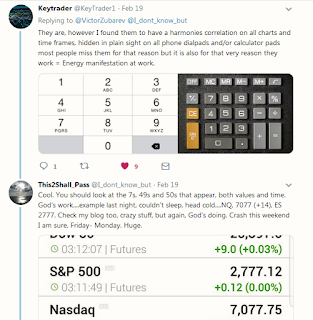 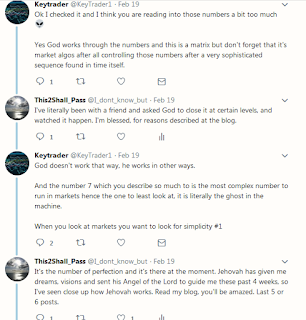 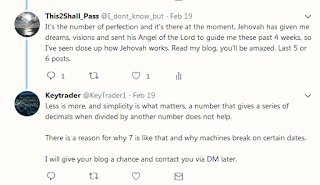 I didn’t notice the ‘evil’ emoji face at the time. I also didn’t really notice that Keytrader agreed with me that 7 was an unusual number to see on a regular basis in decimal markets (he called it the ‘ghost in the machine’), and yet he tried to tell me that Jehovah doesn’t work that way, and that I was reading too much into it. I just thought he was cynical of my claims, and so directed him to my blog for some background reading about my experiences. I assume he did read my blog, and so became aware of the level of my faith and my saltiness too. (All of this became clear to me after the events of 23rd February, not before).

I’ll now share the direct messages that were sent by Keytrader and my replies on that night. I will mention before you read them that I was initially confused at his opening comment, but ‘something’ made it clear to me who was sending me these messages via the Keytrader twitter user. Are you ready? (Please ignore the message he sent me on 20th February, which was market-related, but which seemed to be confirmation that he’d read my blog, and was aware of the repeating 7s). 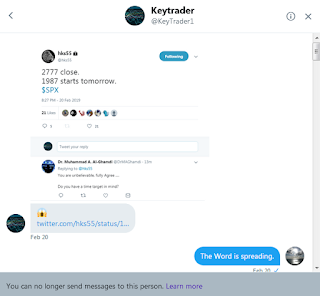 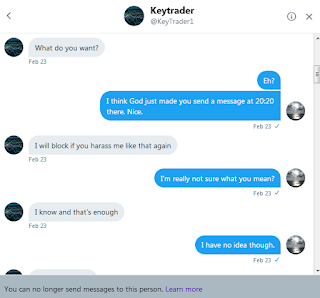 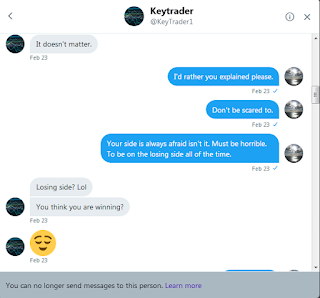 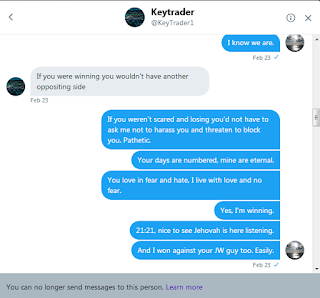 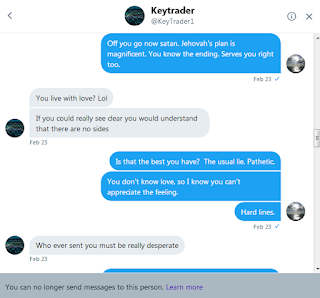 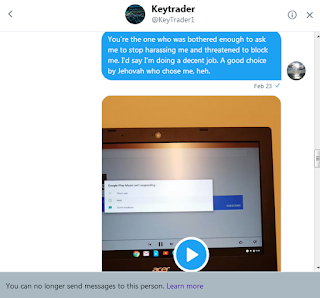 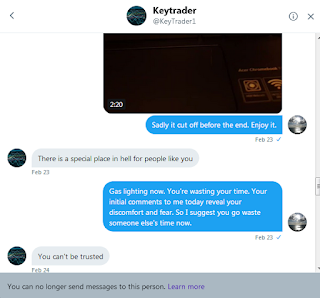 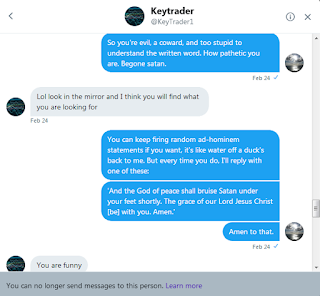 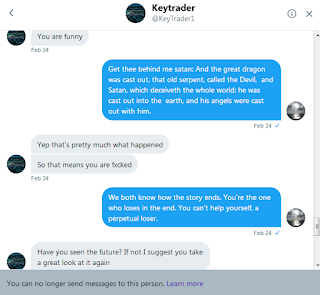 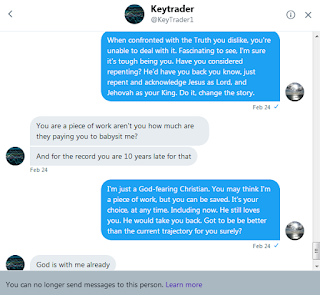 I don’t propose to explain the chat word by word, but those of you who have read some satanic writings online will recognise the pattern of lies employed. I will share two such pieces here as examples of the evil of satan. Please note both pieces are full of lies, and puff up satan (or Nature’s Law) and seek to diminish Jehovah and Jesus Christ. Both also allude to a ‘harvesting’ that is coming soon, one that (in my opinion) relates to Biblical end times prophesies, and so the return of Jesus Christ for His second mission on earth. If you were satan, you’d be working extra hard right now to destroy as many souls as possible via these kinds of lies. Only a few will stick to the Truth as the prophesies are fulfilled.

The evil worldview of a Rothschild

Another example of their lies and deceit. And their evil.

As I was reading the first few messages, and within  minutes of me replying to them in initial confusion, three things happened. Firstly, I banged my head on the open boot (trunk) lid of my car as I removed bags of shopping. Next, I gave myself a small cut on a finger (like a paper cut, but with a piece of plastic food packaging), and thirdly, I stood on the tail of one of my cats (but I’d changed out of my shoes into soft slippers by then). All of these ‘accidents’ reminded me of the experience I had back in the summer of 2016 when I believe I was being attacked by a pagan calling down evil on me. It felt the same, as the accidents were not typical of my life at all, and they all happened within about 15 minutes of this twitter interaction starting.

However, once the conversation started, and I’d been given the revelation that this was satan himself moaning to me about attacking me that afternoon, I can confirm that I felt no fear or panic, in fact I felt very brave, as the chat probably shows. I tried to persuade him to repent of his evil, and played him some of the Bible, which didn’t seem to be pleasing to him.

By the end of the conversation I think Satan had departed from the body of Keytrader, hence (I think) his reply to my call to repent with a statement that I was 10 years too late for that. Also, his final comment, that God is with me already, reflects the satanist’s view that they are serving their god, rather than Jehovah.

I’ve shared this experience with a number of Christian brothers and sisters, and only a few have been able to accept that this was most certainly satan, operating through one of his human servants, who was writing to me. You may find it hard to believe yourself. If so, read the thread again, and ask yourself, why did Keytrader warn me off from harassing him, when I’d not been harassing him at all, but I had been harassing satan himself during my debate with the Jehovah’s Witness account? Why does Keytrader confirm what happened when satan was cast out from heaven? Why does Keytrader tell the lie about ‘no opposing sides’, and then in the next breathe declare that their side is winning? And why does Keytrader get so angry when confronted with an audio clip of the Bible, and declare that there’s a ‘special place in hell’ for me? So many lies, from the literal father of lies. So much gaslighting, from the King of Gaslighting.

Draw your own conclusions of course, but I am sure. I decided to block the Keytrader account shortly thereafter, as I didn’t think it was wise to engage in further conversation with a follower of satan, or with satan himself. I have God’s work to do, I have no time to waste with that perpetual loser, an entity so weak and cowardly he had to ask me to stop attacking him on a Twitter thread read by maybe a few hundred people. Yes, he hates the light of the truth, and I once again give thanks to Jehovah for these opportunities to spread that truth and that light, all of it flows from Him, I have simply made myself entirely His vessel, now and for the rest of my life.

An interesting post-script to this experience came the next day, when my random playing of the Bible one again gave me a message via a chapter that I’d not heard before, but which was indicative of the fact that I am not the only salty follower of Christ to have been visited by satan:

Paul’s Thorn and God’s Grace
7And lest I should be exalted above measure through the abundance of the revelations, there was given to me a thorn in the flesh, the messenger of Satan to buffet me, lest I should be exalted above measure. 8For this thing I besought the Lord thrice, that it might depart from me. 9And he said unto me, My grace is sufficient for thee: for my strength is made perfect in weakness. Most gladly therefore will I rather glory in my infirmities, that the power of Christ may rest upon me. 10Therefore I take pleasure in infirmities, in reproaches, in necessities, in persecutions, in distresses for Christ’s sake: for when I am weak, then am I strong.

I know well by now that the chapters that appear on my music player are far from random, and like St Paul, I know that the dreams and visions and revelations I am experiencing these past few years, and especially these past two months, are not in any way due to my virtue. I don’t deserve any of it on my own merits whatsoever. My heart was opened by Jehovah, all that I can claim for myself is that I have left it wide open, and have cast off the shackles of past beliefs, and recognised the perfection of God’s laws, commands and statutes, and how these, when combined with the sacrifice of the Lord Jesus for our sins, it’s all the perfect set-up for humanity.

Now I proceed with sharing these revelations, and look forward to a life serving Jehovah, and sharing my experiences with others to help save some souls before it’s too late. I also will do all I can to share the good news of the Law, and to use the Law to prepare for the possibility of new Christian nations, during Christ’s reign here on earth, which I happen to believe is now not that far off.

May Jehovah give you all strength and faith to fight against the evils in this world, and may you know His love and support for you in your life, and may you be obedient to Him. Amen.