I visited a client, and mentioned a few of my recent experiences, I had witnessed to them previously, and they mentioned that they had a manna ash tree on their property.

I was shown some scriptures that related to the day of wrath in this period. Isaiah 24: 3-10, 21-23, and also Isaiah 26, the entire chapter is worth a read, especially if you don’t really fear my Father in heaven, and so aren’t living a righteous life obeying His laws. It may cause you to repent swiftly.

On this day I was given some nice revelations about Job 41, and the description that most think is of Leviathan, but is actually about Yehovah. And I was shown that my Father left a mark up on the moor where we met, from His undersides. I have written about these matters already at the post linked: https://www.2malachi.com/40-days-and-40-nights-part-7-9th-april-21-15-onward/

There were also revelations about the hidden meanings behind the name Leviathan. Levi-Yah-Than, go take a look and study yourself. LivYah (means wreath or crown), and Than is pronounced as ‘thorn’, so crown of thorns. So cool. I was also shown some meanings of the individual Hebrew letters in Leviathan, as follows:

It’s the story of the Lord of Spirits, the messiah Yahshua, isn’t it? Again, very cool. Also, of course, we  have the split: Levi-Yah-Than. Levi is obvious, as is Yah, and Than is a sea dwelling mighty creature (my Father). He took the Levites for His priests.

Now onto an incredible sign and miracle, and one which I can show you, although it may be difficult for you to discern easily. But first some scriptures that I had already been shown, that relate to me and the second exodus:

1Then a shoot will spring up from the stump of Jesse,

and a Branch from his roots will bear fruit.

2The Spirit of the LORD will rest on Him—

the Spirit of wisdom and understanding,

the Spirit of counsel and strength,

the Spirit of knowledge and fear of the LORD.

3And He will delight in the fear of the LORD.

He will not judge by what His eyes see,

and He will not decide by what His ears hear,

4but with righteousness He will judge the poor,

and with equity He will decide for the lowly of the earth.

He will strike the earth with the rod of His mouth

and slay the wicked with the breath of His lips.

5Righteousness will be the belt around His hips,

and faithfulness the sash around His waist.

6The wolf will live with the lamb,

and the leopard will lie down with the goat;

the calf and young lion and fatling will be together,

and a little child will lead them.

7The cow will graze with the bear,

their young will lie down together,

and the lion will eat straw like the ox.

8The infant will play by the cobra’s den,

and the toddler will reach into the viper’s nest.

9They will neither harm nor destroy

on all My holy mountain,

as the sea is full of water.

I have already mentioned that the root is the Lord Yahshua, and I am the branch, and verses 2-5 are all about me, not Yahshua. I am the child mentioned in verse 6, and the toddler and infant mentioned in verse 8 are the elect, and we will be up in the mountains of Israel, close to the cobra’s den in Jerusalem. But we will be kept safe by my Father, as the great tribulation afflicts the saints.

I was sat on the sofa doing some stuff on the laptop. Just in front of me, on a small table, was some paperwork, and on top of it was the old child’s illustrated KJV bible in its case, a gift to me from my grandmother and uncles, that I had never used, but somehow I had kept it. Here is the cover, as I saw it facing me, plus a photo of the top of it and the inscription from my family and one of the illustrated pages: 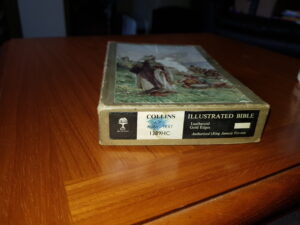 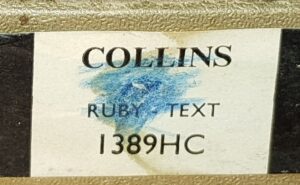 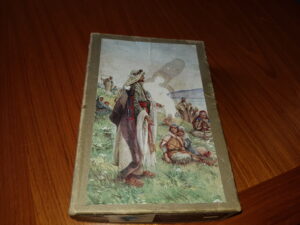 As I sat there that afternoon, I was aware of a very quick flash of light by the bible on the table. Just a small quick flash, momentary, not especially bright or large, but I knew that I had seen something…odd. I was moved to have a look at the side of the bible cover that was facing me, the top photo above. You can see there’s a small smudge of colour, blueish I think (I am colour-blind), on the white label, that is almost certainly crayon, and I am pretty sure has been on there since I was a child (but I could be wrong on that). Anyway, I took a photo of that blueish mark, and then using the zoom option noticed all sorts of amazing things, semi-hidden in the crayon patterns. I am not sure if you will be able to see them, as they are somewhat disguised, but I will try to share them, and will first try to annotate them all, there are many.

You may not be able to ‘see’ all of the things I have identified, hopefully you can see most though. I couldn’t see a cobra, but I think everything else listed in Isaiah 11 is there. I especially liked the toddler sat with his Father, being taught. Overall, a quite amazing miraculous image created by my Father in heaven for me, and for you too.

The animals are likely to be symbolic of the different nationalities that will comprise the elect on the second exodus, which is referred to in verses 11 and 12 of Isaiah 11:

On that day Yehovah will extend His hand a second time to recover the remnant of His people from Assyria, from Egypt, from Pathros, from Cush, from Elam, from Shinar, from Hamath, and from the islands of the sea.

12He will raise a banner for the nations

and gather the exiles of Israel;

He will collect the scattered of Judah

from the four corners of the earth.

Also mentioned in verses 15 and 16, and rather than the Red Sea being parted, it will be the Euphrates this time:

Yehovah will devote to destruction

the gulf of the Sea of Egypt;

with a scorching wind He will sweep His hand

He will split it into seven streams

for men to cross with dry sandals.

16There will be a highway for the remnant of His people

who remain from Assyria,

as there was for Israel

when they came up from the land of Egypt.

So, somehow, 144,000 men and their families, and me, will make their way up into the mountains of Israel in March 2029. Between now and then will come wars, famines, plagues, and earthquakes, plus all manner of supernatural events that will give everyone in the world one last chance to accept my Father’s grace and flee evil and pagan ways. Just over 8 years before the start of great tribulation. I hope you’re ready, living righteously, as I am sure the spewing out of the lukewarm is coming sooner rather than later.

That’s all for this post, as I write it is the night of the Sabbath, it was a lovely day here, I was attacked again in bed last night (supernaturally, by Satan), so I felt tired all day, but somehow my Father keeps me going, and it was nice to make an offering in fine weather. I started late, in the evening, but the fire went out when there was still a little bit of light left in the sky.

Just three days left of my 40 days of testing and temptation by Satan. I will be very glad when it’s finished.

Did you bless my Father in heaven with the commanded offering for Sabbath today? Did you even remember His Sabbath day at all? If not, perhaps you can see why He is very angry currently, so few of us keep His laws, but 144,000 more will keep them perfectly before the day of wrath. Father, thanks for a restful Sabbath day, I needed it, may you be blessed and glorified on earth and in heaven.