I’ve been wanting to write this latest update to the ‘Waiting for Jehovah’ series for a few days, but the end of my holiday and return to England has meant I’ve had less time available, and also so many things keep happening that it’s really hard to keep up. So this will be a long post, the last in this series (to finish with number seven seems appropriate of course).

I’m going to start with a really odd item. As a reminder though, I wrote this in the previous post in this series:

I’ll just briefly mention that my first home was number 55 and my best friend here in England (a brother too of course) was born in 1955, and it’s the number hks has at the end of his Twitter name.

I was moved whilst in Morocco to read about my late grandfather who sadly perished when his ship, HMS Galatea, was sunk by a German U-boat whilst just outside of the harbour in Alexandria in December 1941. I will write a complete post about my grandfather in due course, and some very incredible connections I have with him, and some typical appearances of 7s and 49s, and a few other unbelieveable signs that appear too, but for now I am just going to focus on one item, and that is the German Uboat that sank my grandfather’s ship that night.

I am also going to explain a Bible chapter that played at the same time I was researching the ship on which my grandfather died. It was a Chapter in Ezra, which explained the drive and mission of Ezra (the scribe) to write down the Law of Jehovah, and then upon their relocation to Jerusalem, he read the law from the temple steps each week to make sure that the Jews knew the Law and that they followed it, in order to regain the blessings promised by Jehovah.

As you can imagine, having never heard of Ezra before I heard this chapter play, I was struck by the fact that his mission was exactly the same as mine, except I don’t expect to be reading the Law in Jerusalem, but to be spreading the Law to the ex-Christian West, via the internet and a book and possibly other means, to give the opportunity for new nations under God to spring up after the righteous judgement of Jehovah via His global Sodom-event, when major population centres all over the world are hit by nuclear weapons, feeling His mighty wrath in the process.

So, getting to the point….sorry, at this point I need to jump back in time a little bit. I mentioned that number 55 in my previous post, and have copied that brief mention above. The same number cropped up again whilst I was away, when I was told that it’s year of birth of my best friend back in England (a fellow Christian brother of course), and he was born in April 1955.

I mentioned the incidence of these 55s to a brother, and here are a few screenshots of the conversation that ensued, which are self-explanatory:

So, I was awoken once again at around 5.30am, and as is typical for these moments, a thought is injected into my brain, I assume just before I am woken up, and I have to then go online immediately to confirm the thought injection. On this occasion, here are just a few of the links I discovered, which confirmed why the number 55 was appearing of late:

I do recall 10-4 as a CB radio call sign from my youth ( a long time ago), but I don’t recall 5×5 at all, so one again I conclude the idea was planted in my head as I slept by the Angel of the Lord that is still with me. I took it as a sign that I was understanding God’s many messages and signs, and that He was hearing my prayers too.

Back to the Uboat that sank my grandfather’s ship. Here is a screenshot of the details of that Uboat (prepare yourself):

Here are some key facts and figures:

All of the above is very strange in its own right (and I’ll be covering the Galatea in a separate post), but remember that I was reading the above at exactly the same time as I was discovering the stark similarities between my mission and that of Ezra the Scribe. So naturally I did some research on Ezra, and here’s a screenshot from the wiki page (prepare yourself):

Phew, you’ll note that he had a 7-part prophetic revelation, and (to my shock) he was likely to have had these revelations in the year 557BC. The same number as the code for the Uboat. 55 followed by a 7. Incredible, and yet it’s all completely credible given that these signs are from God Himself.

Moving on, here are a few new twitter followers I’ve gained of late, you’ll spot the numbers quite easily I’m sure, and also there was one called Iam Me, the name Jehovah told Moses for Himself:

I’ll note that this last follower, Tom, shares my grandfather’s first name (Thomas). Tom joined Twitter in July 2014 (7/14) and he has 21 followers. You’ll spot other multiples of 7 as well as a couple of 67s (the year of my birth).

Near the end of my holiday, my friend in Morocco spotted the number of my apartment. We hadn’t noticed it previously, as the number was high up in the right-hand corner of the door, not at eye-level. Here’s a photo: 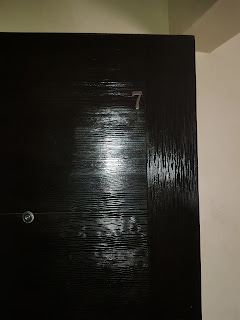 It had to be seven didn’t it?

This is going to be a long post, and I still have two big items to cover, so I will plough on.

Next, just a few screenshots of some amazing numerical displays put on by Jehovah in recent days, as we approach the end of the stock market rally and turn into the crash period:

Now, a quick update on the story of the music playlist on my phone that was altered overnight whilst I was in Morocco, removing a pop song (The Piano Song, by a band called Erasure interestingly), to be replaced by a gospel song by Simple Faith called The Power of The Blood.

I view this item as the first physical proof I’ve had of the hand of God actually changing something in my life, something physical. It’s such a blessing to know that Jehovah is with me, and is sending me these signs.

Two more items to cover quickly, as it’s late here and I am very tired. First, I was reviewing the potential returns for my largest vix call options positions, and on the same day a chapter of the Bible played that immediately made me realise there was yet another connection, and an amazing one at that. Please see the attached image, which shows the gross US dollar cost of the options trade (although please note, the cost to me was exactly £100,000, and I had to increase the figure for this projection, as I pay a higher price for the options due to mark-ups by the UK brokers and the US broker they buy from, everyone gets a nice cut):

I had heard that chapter on the day after (or the same day, I can’t recall) as I had been looking at the options projections. I am now accustomed to these sorts of matches, but 144,000 is quite a special sign I thought.

Finally, for the first time, on Friday 22nd of February, my random shuffle playing of the Bible played the very last book of the Bible, and the last chapter, Revelation 22 (on the 22nd). I took this as a sign that it was the end of the rally, and I would like to see a speedy decline now, as my large options trade expires at the open of US markets on 27th February, so only 3 days away. I need the vix to be at least 30 to avoid losing money, and it’s currently at only 15.

But that wasn’t all. As the chapter played, I heard this part:

Jesus said ‘I am Alpha and Omega’ which meant  ‘I am the beginning and the end’.

However, in finance it means something else, and is connected to the options trades I am using:

So, it was another incredible sign, the end of the rally on 22nd, and the beginning of the crash on the next trading day, which is now upon me, the 25th.

That’s all for this post, but do keep a close eye out for the next post, as yesterday my twitter saltiness caused some discomfort to someone you all will have heard about, yet few will have heard from. Well, he was so peeved with me yesterday, he got in touch, and we exchanged messages for a couple of hours.

Full details to be provided later in the week, and for now I’ll just reveal his name: satan. It’s true, but you’ll see when I share the chat transcripts.

God be with you all, dear readers. Please excuse any typos for now, I need to get to bed.

1 thought on “Jehovah is Waiting for you (part 7): The day of reckoning”