This post is mainly to enable me to keep sharing the 7s signs that I have been receiving recently, they continue a’plenty.

On Saturday 8th February I had another prompt from the Angel of the Lord, once again I was awoken at 05.30am, and immediately I had an idea in my head, which was the need to check the length of the rally from the bottom of the decline on 9th February 2018, up to the secondary peak, which was on 13th March (see attached chart):

I was then moved to count the number of trading days since the market recently bottomed in late December, on the 24th, up until it peaked recently on 5th February, and I found that it was exactly 28 (4×7) trading days (see chart below):

It’s clear that a lot of planning by Jehovah goes into these market moves, and maybe you’ve noticed that both moves up from the bottom to the top of the secondary rally added together comes to ….. 49, or 7x7s. Impressive, He’s a mighty God to be sure.

Meanwhile, back in Agadir, on Saturday evening, I was being driven by my friend Jamal to have a haircut, my first ever in Agadir. I was a tad nervous. As I exited the car, which I had bought him last year, I noticed the number plate had two 7s in it (photo will be added later, didn’t think to do it then). We expressed our mutual surprise, although I’m really no longer surprised by these signs. We entered the hairdressers and had to sit and wait for about 15 minutes for someone to become free. There was football on the TV, of no interest to me, so my eyes were just wondering. I didn’t have my glasses on (I’m short-sighted).

I noticed a framed certificate on the wall above the TV, presumably related to a hair-styling qualification. Despite the numerals being a bit blurry, I could make out a 7 and a 2 on the end of the long number (of the certificate). I nudged Jamal and pointed at it, and he said ‘heh, another 49’. Here’s the certificate: 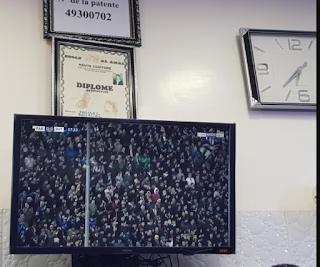 My blurry vision hadn’t spotted the 49 starting this long number. We both laughed. There are hundreds of these sorts of hairdressers in Agadir, yet the one Jamal decided to take me to has two instances of 7s, a 49 and a 7/2. Jehovah is amazing, thanks be to Him.

It was quite late, about 22.00 local time, when I then noticed that the clock to the right of the certificate wasn’t working, and Jamal and I agreed that the time was most likely to be 37 minutes before 7. Nice.

Finally for this update, you may recall I shared the losses in my trading account last week, at -£77,777. It got a lot worse last week, and some positions expired worthless, so £60,000 or so was lost (temporarily). This morning I noticed another row of 7s, not quite as nice as last week, but pretty close:

I also will report that a QQQ call option position that I have which expires on Friday 15th February, and currently has zero value, temporarily mis-priced at the open of the US markets today. I didn’t get a screenshot sadly, but phoned my broker, who confirmed it was erroneous. It showed an increase in the price to around 230 I recall, and a profit of £108,000, so I will be interested to see if that transpires by Friday.

If you are Christian, please pray for the resolution of a dispute between me and another brother, a good friend, as I have reached out to him over the weekend and offered forgiveness and humility, and I need his help with my theonomy project. Thanks, amen. Also, please pray for Jamal. He’s fighting against the desire of Jehovah to have him on His side. He sees what has happened to me and he knows the story of these past few weeks, and when I told him, he said ‘now I am sure the crash will happen’. Then later, after he reflects, he’s still stuck in his Muslim brainwashed world. So I am going to pray for him, with my hand on his shoulder, asking Jamal to open his heart to knowing the one true God, Jehovah, and asking Jehovah and Jesus to send him a sign. I know that many Muslims see Jesus is a dream and the truth is revealed. So please pray for these matters. Amen.

4 thoughts on “Jehovah is waiting for you (part 5)”