Life is really very strange. Most of us just meander along, living, and we really don’t have a clue about anything at all. Most of us don’t think much at all about the meaning of life. We don’t stop to wonder if there’s anything important we might be missing, because we’re just too busy living. Most of us are not curious.

Some of us (like me) do think about life, eventually. Nevertheless, I meandered along for 49 years, thinking, but never really questioning much about my existence, whether it had any point. I had decided when I was 5 or 6 years old that the Bible stories were obviously not true, as some of the miracles described just didn’t seem feasible. As a 6 year old, I was just like a smaller version of my adult self, pretty confident in my ability to determine truth from fiction, but full of hubris as a result. So for the entirety of my life until I turned 49 I was an atheist. My hubristic attitude persisted for a very long time, with no material change until I reached my late 40s, when I started to think about humanity and the meaning of life, without reaching any firm conclusions.

I had a few experiences through my life that were a little bit strange, and whilst they didn’t cause me to reconsider my atheism, they did make me realise there were weird things that happened to me, that perhaps others wouldn’t have experienced at all. Sometimes things happen that are just a bit too weird to be totally random, in my view. The three experiences I had all left a lasting impression on me, and all involved birds. Of the feathered kind.

I was a member of the YOC in England (the Young Ornithologist’s Club )in my teens as I’d always enjoyed watching birds in the garden or in woods nearby, or at the beach.(This was before the age of the internet, so we had no exciting online gaming to occupy us, we had to make do with the wonders of nature outside the house).  One afternoon, when I was 13 or 14, I was out in the back garden in council estate suburbia, when a young crow landed in the garden, and strangely approached me. It was a wild bird, but it wasn’t at all afraid of me, and we ended up playing a tug-of-war with  a piece of string for a while. I wasn’t able to touch the bird, and eventually it flew away, but even to this day I wonder why it just turned up in my garden and had some fun with me that afternoon. Just a random event surely? Whatever it was, I have always had a strange feeling of gratitude that I had that experience. But not to the bird, just to…….something, I suppose. 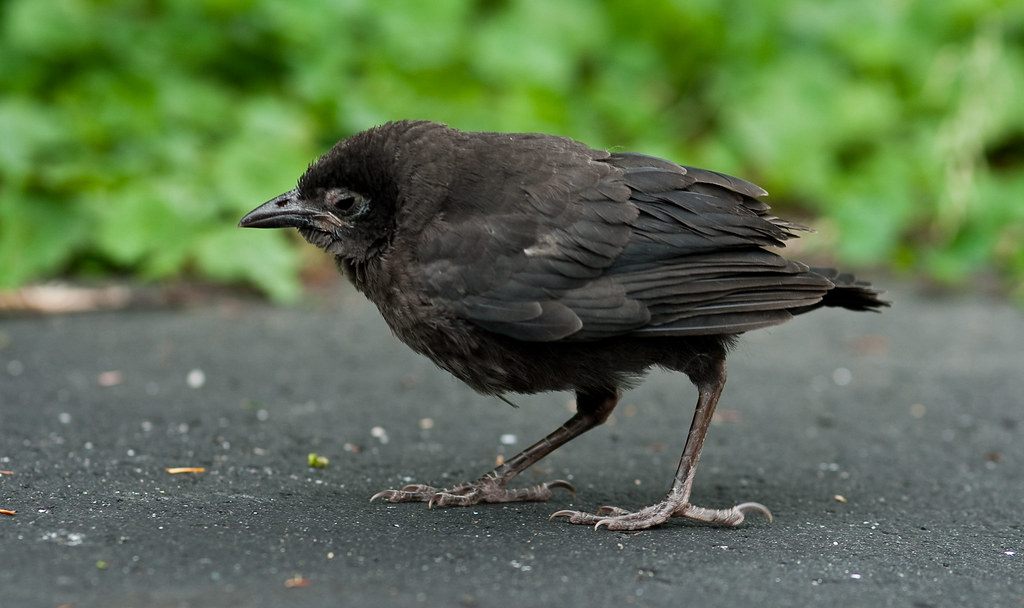 When I was in my early 20s and living in Wales, I had a nesting box fixed to the back of my house, and was fortunate that a pair of blue tits chose it as their home, and they eventually hatched a brood of babies, which I could hear in the box every time a parent returned to feed them. As June approached I wondered if I would be lucky to see them leave the box? Chances were very slim indeed, as I was working full time, and had very little time to spend watching out for the baby birds leaving the nesting box. But I used to look out of my bedroom window down to the box each morning after I’d got out of bed, and would have a quick look around most evenings too when I got home from work.

One morning, amazingly, I saw the parents flitting to and fro the box, and chirping loudly, and then sitting in the bushes in the garden. And then a fledgling fluttered out and landed in the bushes with his parents. And then another 4 or 5 babies followed on behind, all safely flying to the bushes (I won’t ask you to consider how they knew how to fly, having spent their couple of months of life in the dark box). I thought all of the baby birds were out, when a final little bird appeared and flew away from the house. But it didn’t head for the bushes, instead it did a 180 degree turn and banked upwards some 20 feet and landed clumsily on the window sill of my bedroom window, no more than 5 feet from where my head was poking out. The little bird just sat there and blinked a lot, and looked around a bit, then did a little bird poo, and fluttered away to join his family in the bushes. Perhaps I’m weird, but I have always thought that the odds of me spotting the babies leaving the nest was slim, maybe 20/1 at best. I thought it was completely amazing that the last baby bird would veer away from his parents’ calls and head up to meet me for a minute, I wouldn’t even want to estimate the odds of that. Yep, I always thought the little bird was flying up to say ‘thanks for the nesting box, see you around’. And once again, I was really very grateful for that experience, but I had no recipient for the gratitude at that time, I just thought I was lucky, but I did think it was something more than random luck.

Many years later when I’d reached my mid 30s, when on holiday at a very nice luxury resort in the Caribbean that I’d visited 14 times over 10 years, I had the third strange encounter with a bird. There were quite a few birds around the place, especially at the cafe by the beach, and the song birds there were reasonably tame, so I enjoyed feeding them. I’d seen many humming birds over the years in the gardens, they were so beautiful, darting around the bushes feeding. Amazing creatures, and so small and delicate too, certainly my favourite bird to watch in action.

One afternoon I came off the beach to visit the bathroom, and I therefore had to walk through an open-air clubhouse. Whilst it was open-air, it did have a number of windows around the dining areas. As I entered the clubhouse, what did I spy fluttering up and down inside one of the windows? A tiny purple humming bird. Once again, for a third time over many decades, I somehow happened to be in the right place at the right time to be able to interact with one of my favourite creatures. There was no one else around, just me, so I walked over to have a look at the bird. I reckon it had been stuck there for a while, as it was literally panting and I could its little chest pumping really hard, and it actually stopped fluttering up and down and just sat the bottom of the window in exhaustion. What to do, what to do?

I decided to try to help the bird back outside, so I gingerly reached out with cupped hands to try to pick up the bird. I was nervous of squashing it as it was so tiny, so on the first attempt it fluttered away. But on the second attempt it just sat still and I covered it with my hands and lifted it up and took it around the corner to the open air. I opened my palms, and guess what, the bird didn’t immediately fly away, it just sat there looking at me for a few seconds, and then it was off and away. I was left in a state of pure blissful wonderment.

I can remember each of these moments as if they has happened yesterday, and after each one I felt a profound sense of amazement at the way the birds behaved, and a strange sense of wonder at how and why I’d somehow had these experiences, given my lifelong interest in birds. I had a feeling each time of being more than lucky, that it was more than pure chance. Deep down, without me ever really knowing what it meant, I felt I was somehow blessed to have had those experiences, as if somehow my love of birds was known and so the highly-unlikely encounters happened periodically for me.

It’s possible you’re thinking at this point, as I draw this post to its conclusion ‘What does this story have to do with the title of the blog post ‘Jehovah is waiting for you (part 1)’.

Well, you can probably make a decent guess now, but you’ll have to wait for Part 2, where the weirdness and coincidences take on a far more supernatural nature altogether. Life sometimes seems weird, but really, trust me, it’s not weird at all. All will be revealed in part 2 (unless I find it needs a part 3 as well, who knows, the lamb story is worthy of post of its own).

4 thoughts on “Jehovah is waiting for you (part 1)”