Whitsand Bay is a beautiful long sweeping bay in East Cornwall, just around the Rame Head peninsula from Plymouth. It features some lovely sandy beaches, clean azure waters, and some high and steep cliffs. The cliffs are populated with a scattering of wooden chalets, most of which were built by local folk after the war. My paternal grandmother and her second husband constructed one such chalet at some point in the 50s or 60s, and I spent many happy hours over there, more or less from the time I was born and through my childhood, and I return to this place as often as I can, especially on warm sunny days. The family chalet was called Idleour.

I had a few hours this past Monday at the beach in the photograph above, a rare early May bank holiday that was warm and sunny, although the seawater was very cold. I still had a couple of brief swims, we Dumnonian men are brave like that.

The path down to the cliff starts approximately 250 feet up on the main road, and there are two options for the first 100 feet of the walk down. I have always started at what we called ‘the monument path’. It’s a little steeper, but also shorter. Over the years I’d glanced at the monument many times, and had read the dedication on it a few times, but never really gave it that much thought in my adult years, until this latest visit, my first as a Christian, aware of Dumnonia’s past and the nation’s present perilous state, and what may lie ahead.

The monument is very old, it’s been there for nearly 140 years, so it’s nicely covered in moss these days. It stands around 20 feet high, so it’s quite imposing as you start your walk down the path. It’s dedicated to the memory of a father (aged 44) and his two young sons (aged 13 and 11) who all drowned in the seas below in 1878. A long time ago, and the dedication on the monument is shown below: 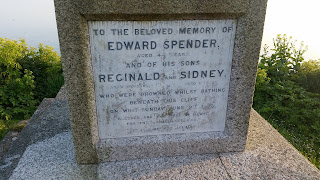 The dedication reveals nothing of the man and children who died, except their names and ages and the date they all perished. In those days, English people perhaps did not think to glorify themselves at all, so instead we see some rather appropriate scriptural words:

‘Blessed are the pure of heart, for they shall see God’

The second quote is from Jesus’ own mouth, as walked on water towards His disciples, who were somewhat shocked by the miracle.

Sadly, the three males who perished on that day could not walk on water, but we can safely assume they were a family of strong faith, and therefore their memorial honours God and His son more so than the family itself. One doesn’t like to think of the terrible experience of death by drowning, especially when a father is trying in vain to save his young sons, but the monument makes it clear that the bereaved family were confident of the fact that their men were now in the presence of their God in heaven, and that must have been a huge comfort to them. More importantly, the deceased themselves gained eternal life with our Father, even as they lost their mortal lives. I imagine that would have made their final moments less terrifying.

The reasons for writing this post arose when I had climbed back up the cliff in the evening, and I reached the monument itself at the top at around 7.45, as the sun was setting. There was no one around, as I had been the last to leave the beach, and it was still balmy and warm. I stopped to take a photograph of the sunset using the camera on my phone, but as I took it I heard birdsong from just above my head and (as a bird-lover) decided to record it on video. But I realised I’d already pressed the video button by mistake (?), so I just turned the camera upwards to the top of the monument. I’ll allow the video I took to show you the following moments, rather than attempt to describe it with words:

I felt very blessed to be there, in such a beautiful place, gazing upon a cross and a memorial to a Christian family from better times, and to hear a beautiful song from a robin. I finally took the time to read the dedication on the memorial, and for the first time in my life I grasped that God meant so much to the bereaved family, and their faith moved them to have a fine memorial placed here that still sends out that message after 140 years of England’s falling away from God.

Ideally perhaps, that would be the end of the post, with a rallying call for the families of Dumnonia and England and Wales to return to faith in our God. But as I returned to my car, which was parked up on the main road along the cliff top, there was a little twist.

The grass verges off the main road are all used by visitors to the cliff for parking and that’s been the case for over 50 years. The chalet owners at the top of the cliff attempt to reserve spots for their own cars, but it’s a public road, and it does get very busy on hot weekend days. So I had arrived late and found a spot which was above a run-down chalet. I parked tight to one end, leaving plenty of space behind for another vehicle. When I returned to my car, an old banger was parked tight to the back of my car, making my exit forward very tricky, if not impossible. So I knocked on the door of the chalet to see if it was the owner’s car and to politely ask him to back up a couple of feet so I could exit without risk of bumping my car. Cutting a long story short, the owner was around 40 years old, a similar age to the poor drowned man memorialised just 40 yards away. He was very angry that I had parked outside his home (although it’s a public road and verge) and refused to move his car, frequently using foul language, and ending with the demand that I ‘go away’, although of course you can imagine his precise words were more earthy.

After some time and effort, fortunately I was able to just edge my car out of the space and headed back home. Initially I was sad and upset that a moment of peace and serenity by the monument pondering the magnificence of God’s creation and the beauty of man’s faith in their God had been spoiled by the interaction with a local man who clearly had no inkling of the Lord’s command to love your neighbour as you do yourself.

But I realised quite quickly that despite the chalet owner’s vitriol and verbal abuse, he was my neighbour, and so I resolved to leave a Gideon bible testament with a personal message inside when I next visit this place. Maybe God knows that Dumnonia and England and Wales can and will turn back to His ways in due course, and the anger and lack of neighbourly love will pass, but only through the nation turning back to Jehovah’s ways. If we don’t turn back, then we will be forever cursed. I pray this neighbour of mine sees the light and is saved in due course, and that all of Dumnonia’s people also come to see the light.

I also pondered if the family who perished that day were aware of someone considering their fates here on earth today, 140 years later? They are all saints now I would imagine, so I reckon they keep an eye on this place, for obvious reasons. No doubt they have seen me over the years as I visited, and they may have been saddened at my lack of faith back then, but on this day I pray they will have been encouraged that even a man like me, ignorant and proud for 49 years, but then two years ago, without even looking for it, saved by a merciful and loving God, and that the opportunity to share this experience here on this fledgling blog will be seen by others, and so the rebuilding begins, the seeds are scattered.

I pray this family monument survives for many more hundreds of years, but that it will be accompanied by a surging renewal of Christian faith and the desire to follow God’s laws and commands as the years and decades ahead unfold. Places like Whitsand Bay are jewels of God’s creation, and they deserve to be filled with God-fearing families. Amen.