You may not have heard of Dumnonia before. It was the name for Devon, Cornwall and Somerset way back in the 4th to 8th century AD. It was commonly known as West Wales, and those that lived here had very close ties with their Welsh brethren.

It was one of the last Celtic strongholds in England, finally falling to the Anglo-Saxons in the 9th century AD. 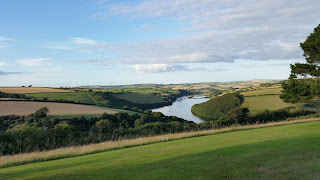 The ‘Watchman’ referred to in the blog’s title is me. I’m an ordinary indigenous man of Welsh and Dumnonian heritage, with DNA tests showing a very high concentration of indigenous DNA that appears to stretch back to those that have inhabited these islands for many thousands of years, probably back to the great migrations that took place after the end of the last ice-age.

Why do I ask those reading this blog to hear the trumpet? A section of the bible, Ezekiel 33 will explain why I feel called to sound the trumpet for my fellow Dunmonians now:

I have been expecting serious trouble for our nation for many years, initially focussed on the financial side of things. In the past two years, the arrival of God into my life, together with bible studies and discussions, has shown me more precisely why trouble lies ahead, what will cause the troubles, and perhaps how some of my neighbours can avoid the troubles, or at least rebuild a new nation here after the collapse of the United Kingdom and England itself.

So, for now, please be warned that life as you know it is already coming to an end. If you have any sense of awareness of what has been happening in the nation over the past 30 years or so, gathering pace with every passing year, you will perhaps already have a vague sense of foreboding for the future.

Do not worry, the troubles of this life are fleeting and minor. Whilst Dumnonia, like the rest of England, has long since turned its back on Jehovah (the name of the Christian God) and His son Jesus, those of you that feel the nagging worry will have the opportunity to turn back to God’s ways and His laws in the years ahead. Right now you may think that’s highly improbable, but rest assured there are indigenous men here who know that God will save us, if we show Him our faithful obedience, and He will raise up a mighty nation out of the embers of what was England and Great Britain.

How will He do that? Simple. As Alfred the Great knew, if one’s nation sticks to God’s laws and commands as contained in the bible, God will bless your nation and make it mighty. It will grow and will not want for anything.

But the opposite is currently true, as we have turned away from God and His laws, we are now suffering His curse. Everything that befalls us in the next few decades or more will be God’s curse for our evils, and we richly deserve everything that comes along: the poverty, the starvation, the diseases, the blood-letting, and more besides.

But have heart people of Dunmonia, have faith that some of you will see the light eventually, and turn back to God and His love and protection, and He will again bless your lands.

I will aim to write at least two blog posts each week, and will expound on the points mentioned in this first post. I will also highlight some of the evils that afflict us and will also look at what may lie ahead for this region, and the wider nation.

May God be with you and bless you, people of Dumnonia.