This is such a great time, I cannot contain my excitement at what lies ahead for the people of Yehovah God over the next dozen years or so. There will be tests, but we will pass those tests, we will keep our great faith in our Great and Mighty God and His wonderful son, and we will prevail and….our faith will be richly rewarded.

One example of that I experienced just two nights ago, and it was fantastic to witness yet another sign given to a brother who is very young indeed in his faith, Andrew down in New Zealand.

I have already told Andrew that he will be to me what the apostle John was to our Lord, because Andrew is the only person of whom I aware that has such faith in God that he believes I am His messenger and prophet (as mentioned in Malachi). Others think I am having a nervous breakdown, or that I am being deceived by our enemy (lol) or simply don’t know what to make of my blog posts. But Andrew, bless him, has believed from when we first became connected via twitter, and then on whatsapp.

He went out into the woods over the Passover and Easter period, with a tent and his bible and some food. He was gone for maybe 10 days, but I wrote to tell him that I had no fears or worries about him at the time, as I knew he was under Yah’s protection. He told me that he slipped whilst crossing a river and fell in, getting soaked to the skin. I told him that this was God letting him know that his baptism is an urgent matter!

I have chatted (voice) with Andrew only twice, the first time was after my Passover and Easter experiences with God, and the second time was two nights ago, just to explain a hidden message I had been shown in a tract I had found from a prophetic ministry that I had tucked away a couple of years ago, for reasons only apparent recently. So, we had a chat about that for around 15 minutes, then said goodbye, but then c.40 minutes later Andrew sent me some messages, and a video clip. Here are those messages:

Yah blessed Andrew with an immediate sign that night, to recognise his great faith and belief, let’s Praise Him for that, He isn’t like me, He doesn’t procrastinate, just ‘BANG, here’s your sign as a thank you, grow in your faith and serve Me well’. A lit cross sign was given to me too a couple of years ago, as a sign he was listening to me one night. He’s an incredible God, our Creator, do we really truly all realise just how close He is to those of us who go all-in for Him? Here’s the video clip that Andrew sent me:
That was supposed to be the end of a very quick and brief blog post, but our Father decided otherwise!
As I was uploading the video I had to enter a title for it, and I had one of those ‘thought injections’ from Yah, I recognise them instantly, and He told me to enter the title as ‘St Andrew’s Cross’. I laughed to myself as I entered it, as memories came flooding back to me.
My brother Andrew is a saint of course, we all are who belief and have faith and obey. And the cross he saw was his gift, a sign from God. So the title was a nice homage to that. But, when I returned to work in my home town of Plymouth in the year 2,000, I was returning due to a promotion with a bank I worked for, to a position as branch manager of one of their branches. The name of the branch was based on its location, which was….St Andrew’s Cross. You can see why I laughed.The branch closed long ago, but here’s some evidence that it did exist, as well as a photograph of the roundabout that carries the name: 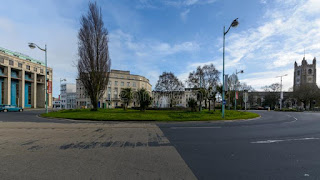 But that’s not all. You will notice in the right-hand corner of the photo a church, which is St Andrew’s church, and that was the first church I attended for a year or so when I first found my faith back in 2016. All these connections , so interesting, God does indeed work in mysterious and powerful ways.

But that’s not all!

Approximately 13-17 years ago, one of my golfing pals went away to university to study for 4 years. The place where he studied is very famous in golfing circles, probably the most famous place, known as the ‘Home of Golf’, and it’s called St Andrew’s. I visited every year to play, and always enjoyed the courses and the quiet ambiance of the lovely old town. I only have one photo on my current PC of me enjoying the deep bunkers on the Old Course, I am pretty sure this was the 17th, the ‘road hole’: 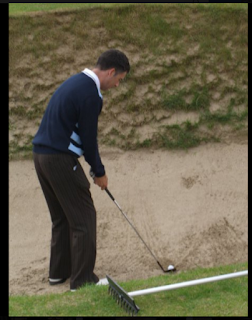 But that’s not all!

St. Andrew (the original, the brother of Peter) is well known as the patron Saint of fishermen. He and his brother were called by Christ to follow him and to be fishers of men. I will remind you of my favourite beach in Cornwall:

The name of the beach is ‘Fisherman’s’.
But that’s not all. I have been chatting for around a year to a brother I met on Twitter, and recently I discovered that he’s not been baptised, something that his dad is disappointed about. So I suggested he come over to meet me in the UK, initially the suggestion was purely to play golf, but I suggested very recently that we combine it with his baptism, and that he bring his dad. Guess where I suggested we go?

That’s the end of the post. Please reflect on how God works on our lives in very mysterious ways, even before we know Him, and will bless those who seek Him and have great faith in Him with wonders and signs galore. If you decide to really put yourself in His hands and commit to a task for Him, or take the Nazarite vow and dedicate your life to Him, watch out, like Samuel and Samson and Paul and others, He will be with you incessantly, as you will soon see from my own experiences of late.
I give praise to the mighty God Yehovah, creator of all things, and provider of strength and succour and joy to those who want to serve Him. Choose to do the same, especially now, in these dark times, when faith has withered all around the world. Your life will change, and only for the better. Bless Yah and the Lord Yoshua (Jesus) always with your faith, service and prayers, and may they bless you with their presence in your life, intimately. Amen.
Postscript: I had a blessing this morning from our Father. I often see deer when I am out walking, but early this morning, they came to see me: