It’s been a while since I wrote something for my blog, although I have been writing for another project for Yah, the soon-to-be-launched Law website. So this is a quick post sharing a couple of nice interactions with The Most High I have had recently.

Even though I have now had a fair few of these, I am filled with awe and joy each and every time, it’s not something I’ll ever take for granted, I recognize it’s a huge treat to see He’s with me, giving me little nudges and signs.

So, the miracle first, and I will copy in below some Twitter screenshots which cover the circumstances:

Twitter wasn’t loading well on my phone at that moment, as I’d just arrived in Morocco perhaps, where wifi isn’t always good. So here are a few more images of both tweets and a whatsapp communication I had just after I’d seen the miracle, with the miraculous image itself immediately below:

As an aside, the phrase ‘God is love’ is misunderstood by nearly everyone I think. I’ll re-phrase it to reflect the correct meaning:

Yehovah is what He prefers

Once you realise this, the coherence of faith in Him and the messiah translating into perfect obedience, being perfect as He who is in heaven (Yah) is, and walking as His son, the messiah Yahshua did, it all makes sense.
So, as you can tell from the images above, I was very excited to have this sign, to see this miracle, as I’d only just grasped what ‘agape’ really meant, and I think the miracle was a sign from Yah that I had correctly grasped the concept of it all. Praise be to The Most High Yehovah, as always, I do not deserve His attention, and these gifts, but I am truly grateful to Him.

Next, a much more personal sign from Yah, I think this is the first sign I’ve had that was obviously about my own personal situation, and I was both amazed by it, and I acted upon it, and I am very grateful to Yah for it.

I’ll need to very briefly explain that my parents cast me out of their lives just over two years ago as they didn’t like the ‘new me’, a man of faith. I never once preached to them, but I did talk about what I was learning, and as baby boomers, they thought they knew it all and didn’t like learning Biblical truths, and just didn’t like hearing about scripture or faith at all, given that they’d never been baptised, and had been non-obedient believers, with weak faith, all their adult lives. At the time I was shocked by their reaction, but now I realise it’s to be expected and in fact Jesus predicted that he would cause divisions between family members.

I continued to honour my parents, however, as I waived a five-figure debt they owed me, and there was still sporadic contact via phone and text messages, but we kept our distance. Also, I forgave them for their actions. My mother started to push for a meeting last year, but there was ample evidence that they hadn’t repented of their dislike of my faith, as she mentioned in a letter that I should ‘leave my faith at the door’ should I visit them, to avoid arguments. Obviously, that’s impossible, as my faith is not like a coat you just take off and hang up, it is a part of me, Yah abides with me now, permanently.

So, I had just turned down a request to visit them which arrived in mid-December, when I received the sign from Yah the next day. Also, the night before I had a dream which involved my parents which was a happy dream, unlike the many unpleasant dreams I’d had where they were present in the previous two years. So, here is the sign, I was on my PC at the time, and I must have been rushed, as I literally photographed the screen, rather than taking a screenshot using a programme, but it’s still legible: 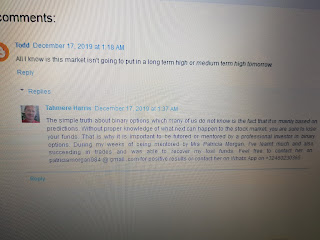 To the best of my knowledge this is the only spam comment that had appeared at this blog, and I’d been reading it and the comments for around 2 years or so. So it was unusual in that respect. From my perspective it was incredible, as the woman’s name mentioned in the comment is my mother’s name, both her forename and surname too. The chances of this comment, with this name, appearing in a first-time spam comment on a blog I follow, just a day or two after another request for a meeting, and the day after a pleasant dream, are too slight to be considered a random occurrence. The comment was deleted the next day by the blog owner, but I have copied below a comment I made about the matter.

I will be honest, I really didn’t want to see my parents, that may sound hard-hearted and callous, but I’m in a new better family now, and my fleshly parents are related to the former me, prior to my re-birth in Christ. Given the way they’d behaved, I did not see any appeal at all in returning to the potential for yet more drama and division.
Yet, I’m always fully obedient to Yah. So I didn’t hesitate and I actually sent the image above to my mother, told her it was a sign from God to me, and that if they still wanted to see me, that I would visit. One doesn’t just ignore these signs, unless one is foolish or headstrong. I used to be headstrong, but now I am fully compliant with the will of Yah. So, there was a delay in my mother replying, as I imagine they struggled with accepting it as a sign from Yah. However, we did meet recently and there was no trouble, so hopefully they will be able to accept me as I am from now on.
Either way, thanks to Yah for caring enough to show me this sign and give me nudge. I laugh when people say Yah is far away from us because He doesn’t like us. Speak for yourselves sinners, when you’re fully obedient and walk as Messiah walked, Yah couldn’t be closer, as he literally abides within you. Can you imagine what that feels like? It’s freely available to all, just accept Jesus was the Messiah, and then live according to Yah’s rules. Sounds easy, and in truth it is easy, but you have to perhaps ditch your own ego and bad teaching that may have deceived you. Satan wants you to suffer eternal death remember, so he will encourage you to eat swine or shrimp or to celebrate pagan festivals, and make you think it doesn’t matter, and you’ll perhaps think it’s OK too, it’s just a small thing, and doesn’t matter you’ll think, you’re so smart. Wrong. Blind fools, bang you’re dead, burned in the Lake of Fire. Notch another one up to Satan.
‘What, what’s that? Unclean food laws, no, they don’t apply any more’ I can hear you screaming at your computer. Modern times, no need for all that nonsense (don’t tell the Godless Chinese, just seen their swine herds decimated, and now a pestilence hitting them, as they eat dogs, bats, snakes, you-name-it). Yes, I retort, apart from the fact that messiah tells us that not a jot nor tittle of the law will pass til all has been fulfilled (i.e. a new heaven and earth appear with Yah amongst us here), we have a prophecy in Isaiah that confirms, at the End Times, swine eaters will perish:

Final Judgments against the Wicked
15For behold, the LORD will come with fire—
His chariots are like a whirlwind—
to execute His anger with fury
and His rebuke with flames of fire.
16For by fire and by His sword,
the LORD will execute judgment on all flesh,
and many will be slain by the LORD.
17“Those who consecrate and purify themselves to enter the groves—to follow one in the center of those who eat the flesh of swine and vermin and rats—will perish together,” declares the LORD.

I listen to the Bible a lot on random shuffle, and as I’m working on my theonomy project currently, it’s amazing how many chapters from the prohets (like the one above) have dropped in, Yah constantly gives me what I need from scripture when I need it. Let those who have ears, hear.
I’ll conclude with some further scripture:

‘By this we can be sure that we have come to know Him: if we keep His commandments. 4If anyone says, “I know Him,” but does not keep His commandments, he is a liar, and the truth is not in him. 5But if anyone keeps His word, the love of God has been truly perfected in him. By this we know that we are in Him: 6Whoever claims to abide in Him must walk as Jesus walked.‘

Jesus did not eat swine, nor did he eat shrimp, nor did he celebrate pagan festivals. Why do you?

‘Anyone born of God refuses to practice sin, because God’s seed abides in him; he cannot go on sinning, because he has been born of God. 10By this the children of God are distinguished from the children of the devil: Anyone who does not practice righteousness is not of God, nor is anyone who does not love his brother.
‘If anyone confesses that Jesus is the Son of God, God abides in him, and he in God. 16And we have come to know and believe the love that God has for us. God is love; whoever abides in love abides in God, and God in him. 17In this way, love has been perfected among us, so that we may have confidence on the day of judgment; for in this world we are just like Him’

I explained above that ‘love’ used above is ‘agape’, meaning ‘what Yah prefers’. So now you know the missing ingredient, if you don’t have Yah abiding with you, if you think He’s far away and hates us: you’re following your own heart, your own puny IQ, rather than His will. Not at all a wise approach.

2 thoughts on “Another miracle, plus a sign from Yah”