As most of my readers know I listen to the bible each day and play it on a random shuffle basis, so verses are played randomly. I always reset it each day too, to keep it totally random.

As I’ve noted in previous posts, very often the first or second verse to play, or even a run of verses, will be pertinent to my scripture studies or to my own life, or to something I’ve been talking about online or in real  life. I am beyond being surprised now at how Yah uses this mechanism to teach me, so as always, praise to Him for being here with me, helping me learn and grow in wisdom regarding His ways.

Just two days ago I was chatting (via Twitter messenger) with a brother in Toronto, when I mentioned Christmas, as you can see in the image below. This brother (JV we’ll call him) didn’t heed my warnings about Christmas being a pagan festival, around the winter solstice, not at the time of Christ’s birth, not one of Yah’s commanded festivals, and something scripture specifically warns us against. 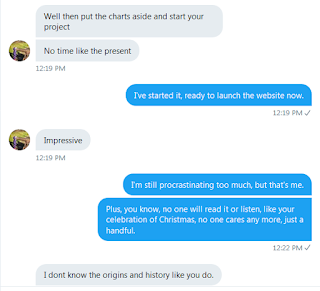 I had explained to JV back at Christmas that it was a sin, that Yah warns against it, and I recall I had provided some links to read about its pagan origin. Any God-fearing believer would have wanted to do their own research online, as well as study scripture. But JV, and other brothers I know, were happy to follow their hearts. Here’s what JV said back on Christmas day. 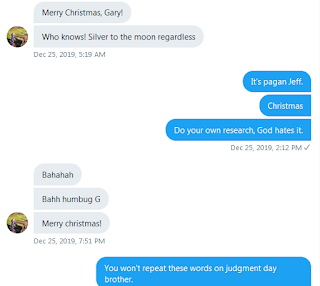 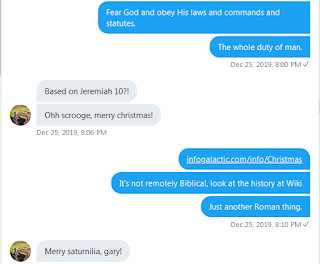 I won’t comment on JV’s responses there, but the same sort of response was received by two of the men who attended my own baptism at a blog one of them writes, as you’ll see below. They go by the names ‘Aeoli’ and ‘Koanic’, whilst I am ‘glosoli’ and another God-fearing brother and friend comments as ‘Mycroft Jones’. 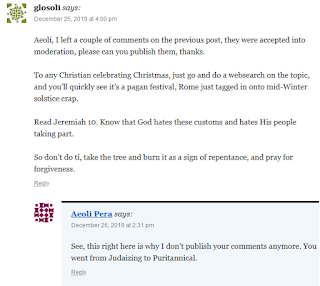 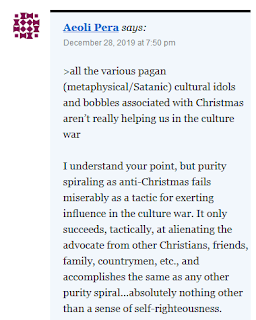 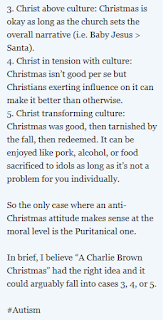 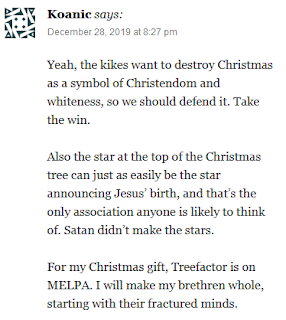 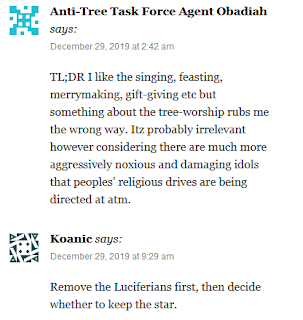 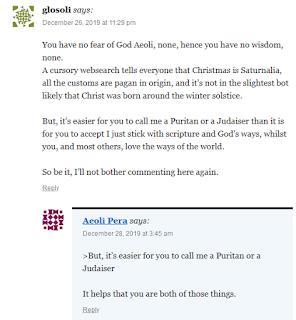 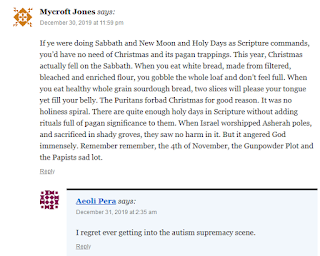 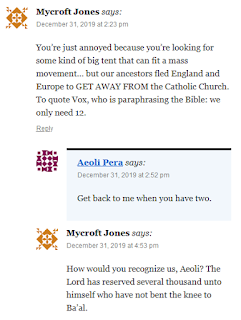 Go and do a search of scripture for ‘culture war’ and see what you find. There are far more than two of us God-fearing Christians out here, but the modern church and its flock don’t want to hear our messages, don’t want to actually walk as Yeshua walked (1 John 2:6), not to be perfect, as our Father in heaven is perfect (Matt 5:48). They prefer to follow pagan ways and their own hearts.
My comments are no longer allowed at that blog, it’s the Churchian way, when Fake Christians hear scripture telling them to do something, or not to do it, and their heart prefers to do what they desire instead, they react badly. In fact they’re simply rebelling against Yah Himself, as I am just sharing His word and calling for repentance. It’s just a modern-day example of what we see all the way through scripture.
Talking about scripture, and the title of this post, within a couple of minutes of the messages above with JV from two days ago I fired up my bible audio and the bluetooth speaker, and as always I wondered what would be the first chapter. Well, I was not disappointed, in fact I was highly elated, as it was in fact Jeremiah 10 that played, you may have seen it referred to above. Here is me telling JV the news. 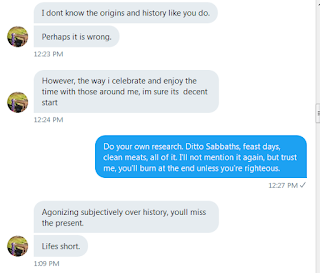 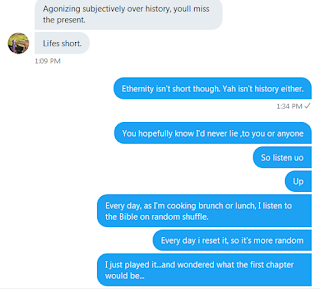 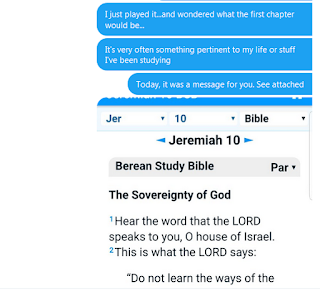 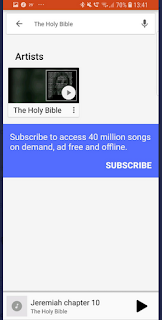 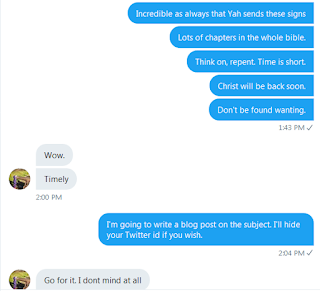 There are 1189 chapters in the bible apparently (according to online sources, I haven’t sat and counted them), so there’s a one in 1189 chance that this chapter would appear ‘randomly’. Guess what? It isn’t random, Yah abides with me, he knows that I’d been mulling writing a blog post on this subject, but hadn’t done so, so He gives me a nudge and sends a sign.
Now, if I were JV, or Aeoli, or Koanic, I’d read this and I would seriously reconsider the path they’re on. I am saddened, very saddened, that two men who attended my baptism and helped to introduce me to my faith a few years ago, are both so far from Yah, full of their own ideas and with zero regard for His authority. Let’s be frank, if they continue to ignore Yah’s will they will not be resurrected to meet Yeshua, they will burn with the other dead at Judgement Day.
I pray, I hope, that these men will get down on their knees today and pray for forgiveness, and with real fear of Yah will then seek His ways, ask for His wisdom, and follow His guidance, it’s in scripture, it’s easy to do, His yoke is easy to bear.
Here’s the pertinent section of Jeremiah 10, see if you think it leaves any doubt about Christmas and pagan festivals:

The Sovereignty of God
1Hear the word that the LORD speaks to you, O house of Israel. 2This is what the LORD says:
“Do not learn the ways of the nations
or be terrified by the signs in the heavens,
though the nations themselves are terrified by them.
3For the customs of the peoples are worthless;
they cut down a tree from the forest;
it is shaped with a chisel
by the hands of a craftsman.
4They adorn it with silver and gold
and fasten it with hammer and nails,
so that it will not totter.
5Like scarecrows in a cucumber patch,
their idols cannot speak.
They must be carried
because they cannot walk.
Do not fear them, for they can do no harm,
and neither can they do any good.”
6There is none like You, O LORD.
You are great, and Your name is mighty in power.
7Who would not fear You, O King of nations?
This is Your due.
For among all the wise men of the nations,
and in all their kingdoms,
there is none like You.
8But they are altogether senseless and foolish,
instructed by worthless idols made of wood!
9Hammered silver is brought from Tarshish,
and gold from Uphaz—
the work of a craftsman
from the hands of a goldsmith.
Their clothes are blue and purple,
all fashioned by skilled workers.
10But the LORD is the true God;
He is the living God and eternal King.
The earth quakes at His wrath,
and the nations cannot endure His indignation.

11Thus you are to tell them: “These gods, who have made neither the heavens nor the earth, will perish from this earth and from under these heavens.”

That’s it for this post, praise the Lord for being here with me and for nudging me, and for the friendship of my brother Mycroft.  I beg His mercy for my procrastination. Amen.