Let’s see if I can keep this one brief.

I’m now going to share my experiences of the evening of 8th April 2020. During the day at some point I was given a ‘thought injection’ to go for a later evening walk than usual, so that the walk was by moonlight. As is often the case, a song was tied to this event, and it was another by Gorky’s Zygotic Mynci this time, a tune called ‘How I long to feel that summer in my heart’.

The opening lines are relevant to this evening walk:

Out here in the country

Where stars they shine

You can even take a walk by moonshine

So, I set off from my home at around 20.00, back in early April it was getting dark by 20.30 I recall, so I expected it turn to dusk and then dark as I walked for approximately an hour or so. I have notes that I saw a deer on the walk, which was typical at that time. Nothing much happened on the walk until I came back down off the top of the hill, where I noticed something very odd. Although it was a very clear night, not a cloud in the sky, and stars galore, it was very dark indeed, and there was no sign of the moon whatsoever. I knew exactly where it should have been in the sky too, as I was bathed in moonlight the previous night as my Passover meal was finishing, and it was also a full moon on this day. So I was bemused, and it was very dark. By then I was walking along the narrow road back into the village. Suddenly a black sports car with darkened windows raced towards me at high speed, but continued past me. It got my heart racing.
As I entered the village itself I decided to phone a friend and brother locally to find out if he could see the moon from his home which is only a couple of miles from me. He couldn’t see it either. I have asked him to comment below this post to confirm that it was ‘missing’ at this point in the early part of the night.
I then walked up the hill towards my home, and as I walked off the lane and up my driveway, which curves around to the right I approached my home. I was still on my phone to my friend at this point, and I told him what I had noticed, that the front door to my home was ajar. I knew that I had locked it, as I am a bit OCD about locking doors and double checking them afterwards, so I knew that something was happening at this point, I had no idea what.
Oddly, I didn’t feel afraid at all. In years gone by I would have been very nervous of entering the house at that point, for fear that an intruder was inside. But I wasn’t scared, and in honesty that was because I suspected it was a test of some kind, rather than a human intruder. If it was a test from our Father, I knew I didn’t need to worry about a physical intruder attacking me, and if it was something from the enemy, I haven’t feared him for a long time, not since the first time he came for me actually. So, with my friend on the phone still, I did a quick check of the house, but found nothing untoward. I said goodbye to my friend and went indoors, thinking that I’d passed the test, and still curious as to where the moon was?
However, the test was yet to come.
A little while longer and both of my cats came in from outside, it was around 22.00 I think. Straightaway I noticed that Ollie was staying away from me and was behaving aggressively toward his brother Seve. I couldn’t get near him in the dining room, as he darted around and under the table. I was confused at this point, as this was how he behaved when he had been possessed by a demon, but I knew that I had cast out the demon and forbidden any demon from re-entering my cats, and my faith meant that I just knew it was impossible for a demon to be back in Ollie. So, I pondered if Yehovah was testing my faith in this regard somehow, by ‘faking’ a demonic possession, but it didn’t seem right that this could be possible to me.
Suddenly, and it may have been a ‘thought injection’ again (bearing in mind Yah was inside my mind all of the time in this period), I realised that Ollie was indeed possessed, but the entity possessing him was the only entity on the planet that I can’t order off my property or out of my cat. Yes, I knew that Satan himself was possessing poor Ollie, and Satan was tormenting him, but was also staying away from me, probably because Yah was with me then, inside my temple, literally.
It didn’t take me long though, just a minute or two, to corner Ollie and grab him, even though he didn’t like it and tried to escape my grasp. I managed to get him cradled in my arms like a baby so I could look at him, and the eyes that were looking back at me weren’t Ollie’s eyes. They were horrible, dark, bloody red eyes, like a snake’s with the narrow black line through them. Ollie’s eyes are a nice light green normally, with a normal-sized cat’s pupil. I will try to find a photo of Ollie’s eyes, and search online for something that resembles Satan’s eyes. 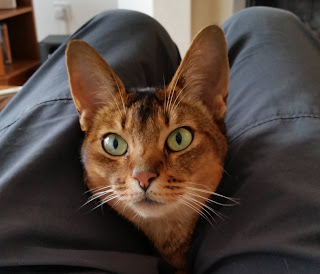 That is actually Seve not Ollie, but they have the same colour and shape of eyes, and sometimes even I can’t tell them apart. As you can see, a lovely bright green colour to their eyes. 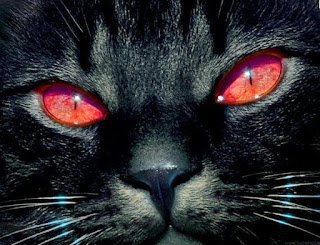 That is the nearest I can find online, but the eyes I saw were a much darker bloody red colour, and the black pupils were larger. The eyes had energy to them, like there was fire within them, or liquid, it’s hard to describe, but they didn’t look at all like anything I have ever seen on a physical being before. The word I have used to describe the look that these eyes gave me from Ollie’s head was one of pure belligerence, pure hatred. Not evil as such, just hatred. So, it was a weird experience, but as regular readers will know, I have encountered Satan before, and have no fear of him.
So, with Ollie cradled in my arms like a baby, but held firmly, I simply stared back at Satan’s eyes, not with hatred of my own, rather with meekness. I don’t think I spoke out loud, I can’t be sure, but I said aloud or in my mind ‘I am not afraid of you and you can’t harm me as Yehovah God and the Lord Yahshua are abiding with me, so it’s up to you, but I am happy to stand here with Ollie in my arms all night and we can stare at one another, and at least it prevents you from hassling anyone else’.
Ollie has been in my arms for a couple of minutes by this point, and the staring had been only for 30 seconds or so before I said (or thought) the above comment, but within a few seconds Ollie gave a tremendous twist and struggle and got out of my arms, jumping down to the floor, and then he seemed to see something move away from him, but I couldn’t see anything. Then Ollie was back to normal, his eyes were green again and he was happy to be near me, in fact, he was very clingy for the rest of the evening, which is understandable given what he’d experienced, poor thing, and after frequent demonic possessions over recent years too. Here is a photo of him and me shortly after the departure of the evil one: 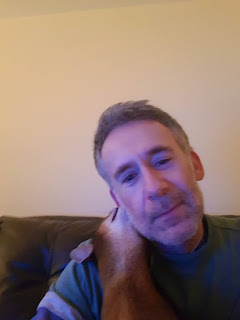 He loves his cuddles, much more than old Satan did it seems!
That was it for the 8th April 2020, I was exhausted from the hours spent at the computer during the early hours of the night before, so I went off to bed hoping for a good night’s sleep and wondering what the 9th April would bring me. 8th April 2020 was a Sabbath by the way, as well as the first day of the Feast of Unleavened Bread.
I forgot to mention, but as I let the cats in at around 22:00, I noticed that the moon had appeared, in he position where it was the previous night. So I knew that our Father had hidden it somehow. Not only is this typically impressive of Him (although easy for Him of course), I was then blessed the very next day with the following scripture whilst I was listening to the Bible on random shuffle play as I do every day:

The dead tremble—
those beneath the waters and those who dwell in them.
6Sheol is naked before God,
and Abaddona has no covering.
7He stretches out the north over empty space;
He hangs the earth upon nothing.
8He wraps up the waters in His clouds,
yet the clouds do not burst under their own weight.
9He covers the face of the full moon,b
spreading over it His cloud.
10He has inscribed a horizon on the face of the waters

at the boundary between light and darkness.

So, Job is a prophetic book, in fact it’s one of the most revelatory books of the Bible. I look forward to studying it in more depth when time allows. But obviously, it was a thrill to hear the mention of the full moon being covered, and I suppose Yah just created a small cloud and placed it in such a way as to obscure the moon from my part of the world.

I was shown many other revelations that are contained within Job 26 at that time, which I will cover later for you. But as a teaser, consider these:

He stretches out the north over empty space;
He hangs the earth upon nothing.
He has inscribed a horizon on the face of the waters at the boundary between light and darkness.

Why do you think our Father would need to inscribe a horizon? Heh, it is obvious why, but the truth may seem ‘odd’ to you. The earth is hung from nothing? Could that be something to do with why we need gravity? And no mention of the south being stretched out, just the north. It clearly points to something very obvious, which I will share with you very soon.
The end, is that a literal miracle, the fact I managed to produce a brief post as I intended? No, of course not, but it’s a blessing, as I was up writing until gone 1am yesterday, and I will get off to bed now, before 23.00.  **(fail, as I forgot to mention that the moon had re-appeared and the connection with Job 26). More to write tomorrow, the 9th into the 10th April, a 24 hour period containing events none of us would even dare to dream we could experience. But I won the Yehovan lottery, somehow (second place actually, the Lord Yahshua won the jackpot prize, deservedly so).
Thanks be to our Father, and blessings to Him and the Lord Yahshua as always, I pray They are enjoying the reminiscing with me, and that they help me to do a good job of describing the events.