I lost my landline and wi-fi for a few days, due to a huge thunderstorm, and the lightning hit a tower (I assume) as the phone networks were affected. I don’t have 4g out here in the countryside, so I was offline mostly, but it gave me a chance to start on the Apocrypha, and I have read Enoch, and wonder why I have never read a soul anywhere mention ‘The Elect One’?

Back to my story, and on to the 15th April, when the electrician turned up in the morning to sort out the power issues. He was very bemused by what he found, but I think I have already written about that, but he couldn’t work out how things were wired the way they were, it took him hours to sort it out. I knew it was my Father’s doing, to knock me offline, and to leave me with only enough power to the hob to boil water.

I continued to study scripture, and noted these verses:

When men tell you to consult the spirits of the dead and the spiritists who whisper and mutter, shouldn’t a people consult their God instead? Why consult the dead on behalf of the living? 20To the law and to the testimony! If they do not speak according to this word, they have no light of dawn.

21They will roam the land, dejected and hungry. When they are famished, they will become enraged; and looking upward, they will curse their king and their God. 22Then they will look to the earth and see only distress and darkness and the gloom of anguish. And they will be driven into utter darkness.

To the law and to the testimony!  To light, to dawn, and not to utter darkness. Don’t be deceived by the wolves who teach lawlessness.

It was a feast day on 15th April, part of the unleavened bread period. I can’t recall what I did, maybe I put something on the altar, but I can’t recall.

I phoned an ex-colleague, she was my boss, a bank manager, and I was her assistant manager. We were a great team, and our branch was very successful indeed. I had not spoken with her for maybe 6-7 years, we lost touch eventually when I moved back to Devon from South Wales. On this day that I phoned her, she had been given the news that she had breast cancer. Coincidence? No, of course not. I never knew it, but she is a woman of faith too, so we had a nice chat.

On to the 16th April I had a phone chat with another former colleague from South Wales. She too had faith it turned out, but neither of these women had been baptised. We had a good chat, and I shared my blog with her. Subsequently, as I have tried to call again to arrange to meet these people when I visit Wales, I was unable to get through to her. Eventually, recently, she sent me a message:

She hasn’t been baptised, so no holy spirit and no defence against the demons that she is hearing, warning her to stay away from scriptural truth. Sad eh? She is in Satan, not in Christ Yahshua, living in sin, day after day, probably afflicted with a 2 Thes 2 delusion, destined for the lake of fire. This saddens me greatly, but my Father makes the rules.

On the 17th April, whilst I was on my walk, I saw something odd, three old boots hanging from a tree, that had not been there previously. They were all very old, and had moss growing on them. One of the boots had a white inner lining that had come out through the bottom of the boot, and I knew this symbolised the cleansing of Dumnonia in due course. Another boot was very small, or little. And I knew that ‘little boot’ was the nickname given to the Roman Emperor Gaius Julius Caesar Augustus Germanicus, more commonly known as ‘Caligula’.

I read the ‘I, Claudius’ books by Robert Graves when at school, hence I knew what this boot signified. I knew that Caligula had invaded Britain, and that Claudius had done the same, more effectively. Here’s a quick note from wiki on Caligula:

‘In AD 40, Caligula expanded the Roman Empire into Mauretania and made a significant attempt at expanding into Britannia – even challenging Neptune in his campaign. The conquest of Britannia was fully realized by his successors’.

Neptune appears once again, interesting. Here are a few photos of the boots: 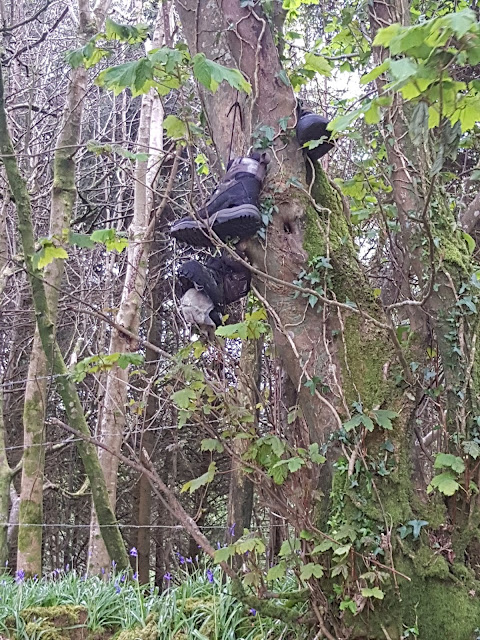 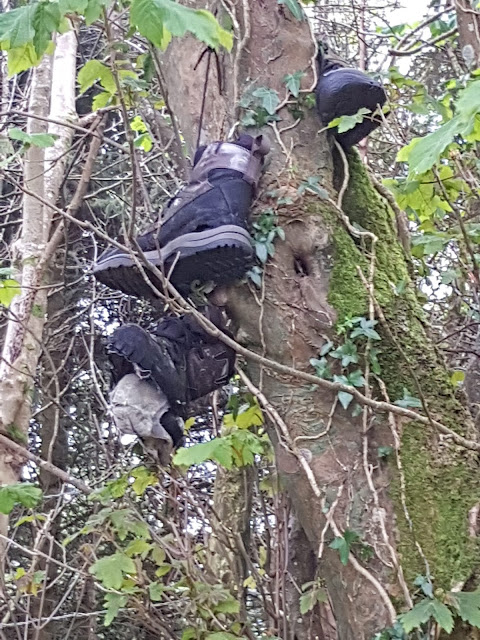 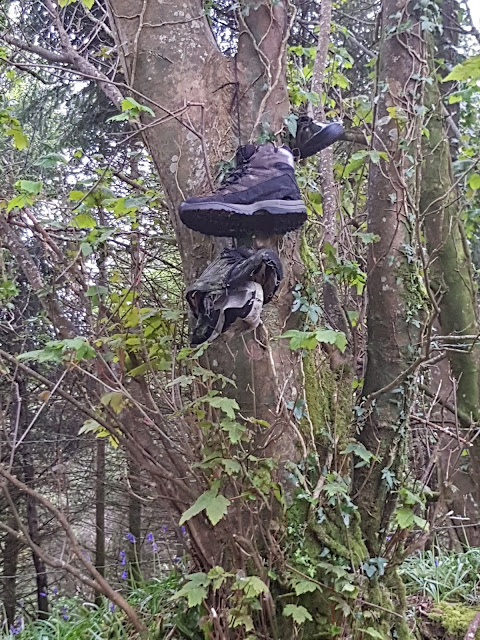 On the 18th April, I was played scripture from Exodus which prophesies that one like Moses will be sent in the future. Seems a good bet that is me, re-teaching the law, and then leading an Exodus (which I am sure is part of the plan for the 144,000).

Then the LORD said to me, “They have spoken well. 18I will raise up for them a prophet like you from among their brothers. I will put My words in his mouth, and he will tell them everything I command him. 19And I will hold accountable anyone who does not listen to My words that the prophet speaks in My name.

Peter also mentioned this prophet in Acts 3, AFTER he had spoken about the Lord Yahshua:

For Moses said, ‘The Lord your God will raise up for you a prophet like me from among your brothers. You must listen to Him in everything He tells you.f 23Everyone who does not listen to Him will be completely cut off from among his people

I made some notes about Moses being taken out of the water, water is a big feature in scripture isn’t it?

I made a note that my dad used to work in Devonport Royal Dockyard, in Goschen Yard. Slightly different spelling to the scriptural Goshen, but same name.

I was then given a revelation, about Revelation 17:12, and it’s a very interesting one:

‘The beast that was, and now is not, is an eighth king, who belongs to the other seven and is going into destruction. 12The ten horns you saw are ten kings who have not yet received a kingdom, but will receive one hour of authority as kings, along with the beast. 13These kings have one purpose: to yield their power and authority to the beast’.

Firstly, one hour as a proportion of one day had to be calculated, and the proportion then applied to my Father’s day, which is a thousand years, giving a period of 41.66 years. The events referred to above are the dissolution of the Soviet Union, which took place on April 1st 1991. The dissolution happened, but was entirely fake, the beast (Russia) dd not cede any control at all. The 41.66 years from that date aligns PRECISELY with the most significant date since creation, the day of the great and terrible wrath of my Father in heaven. So, now you know when that is, but I wasn’t planning to reveal that here and now, so I will keep the precise date under my hat for now, but it is in 2032, and the date was derived on this night. And it happens to be the same date as my baptism (oh, I gave it away).

Also, on 4th April 1991, a show opened on Broadway, called ‘Lucifer’s Child’. I have a revelation about that to share in due course, the identity of the lawless man, who is literally the son of Lucifer. Easy to work out, just check the evil leaders of the world, check their names, check their fakery of wanting global peace (once America has been destroyed). I will reveal it once the website is up and running, it’s an easy guess though.

I went on my walk that afternoon, the graveyard was in a mess, and I saw a stag in the field, which was great  to see. A deer appeared to be waiting for me, it was looking back towards me as I passed on the footpath. At the end of the walk, as I reached the crossroads where I would turn right, up the lane back to my house, I was directed to look over to the other side of the crossroads, where I saw something incredible. I hope you’re ready for this one, as it is double-special. I will show you in photos what I saw from the angle as I approached it, and then what it is when looked at from the correct point: 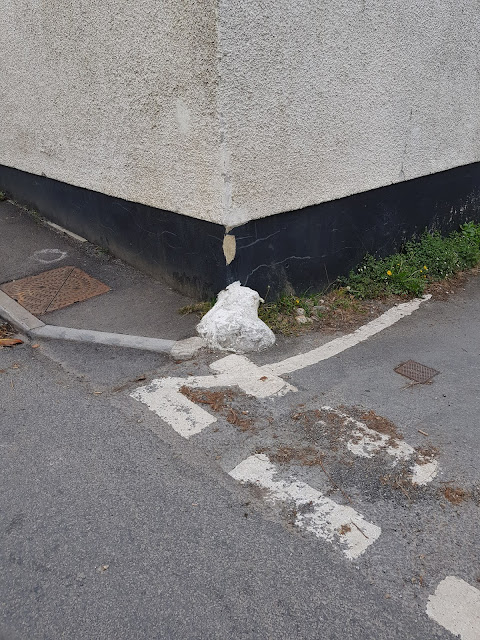 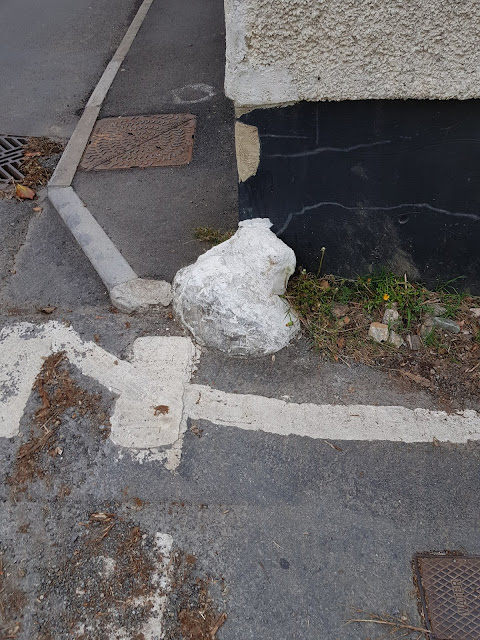 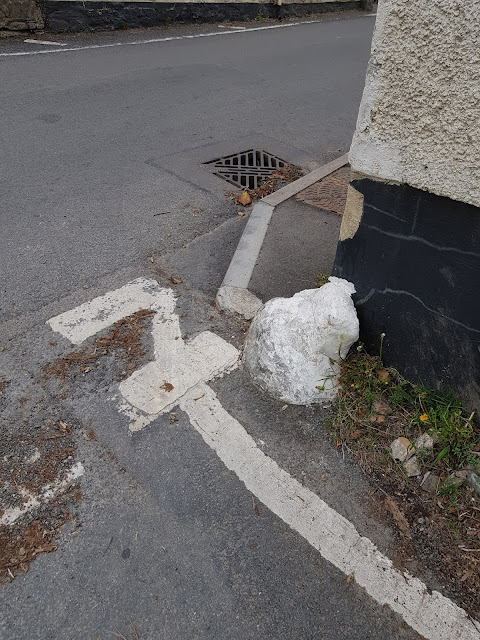 As you can see, it’s a number 7, something I have never seen painted like that on a road before. And alongside it is a white corner stone. It needs no further comment.

I was also shown that the letter in Hebrew ‘sayin’ looks like this seven in the road:

It is the seventh letter too, and I have already written that the well known sayin(g) ‘Know what I’m sayin’ is just my Father having some fun, as it would read thus if written without a contraction: ‘Know what I AM sayin(g)’. He’s too smart for most of humanity to get His humour, I only get it because he graciously shows me.

They just happen to be sea-horses!

I was given a sign that day too, a strange one (yet another) but it tied into the sayins/7s. I was shown three of them in an unexpected place, on my dinner plate: 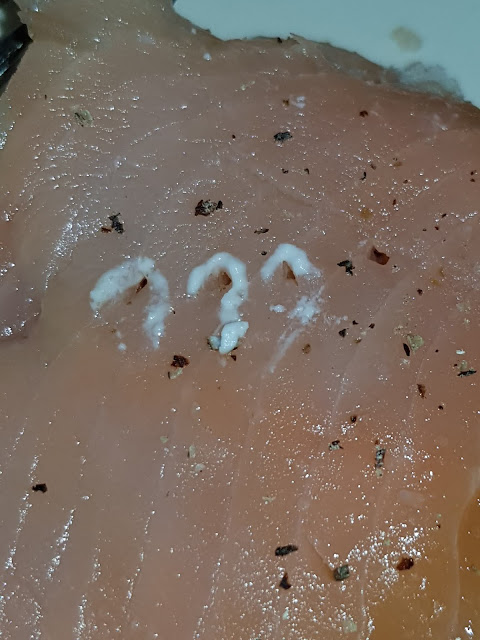 That’s some smoked salmon, and some cottage cheese, which somehow appeared as thee 7s. A miracle, if you will believe it, as with all of these things, which are given so that you the reader may believe, not so much for my benefit.

Finally for this post, at 21:45 that evening, the wind came up and there were noises, rustling outside the lounge window and the front door banged. I felt it was my Father, so I asked Him to rattle the letterbox if He wanted me to go outside to meet Him, but there was no rattle. A little later I had a quick look outside anyway, and saw nothing, but felt something buzz my head.

That’s it for this post, it won’t be too long before I am caught up to date with my story, which I was told to write down by my Father. All of the blog posts should be moved over to the new website by the end of the month, plus I will have put enough content on there to take it live, with lots more to add over the next year and onward. Exciting times indeed, but times that are deadly serious, we are speeding toward the tribulation, which I believe is 7 years long, although I haven’t looked into that yet at all. If it is 7 years, that means a few years to go yet.

Bless you readers, if you are in Christ, and if not, sort yourself out. Bless my Father in heaven for His creation and love of His people, and bless the Lord Yahshua for his faith and obedience and bravery.